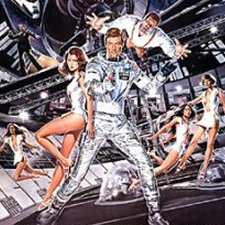 James Bond is back! Fans of Roger Moore’s portrayal of James Bond 007 in the 1970s are in for a real treat. The historic Genesis Cinema in London is holding a special screening and Q&A event to help celebrate the 35th Anniversary of the eleventh James Bond film Moonraker (1979), with three key members of the production team who worked on the movie due to attend.

The special event takes place on Sunday, 5th October, at 3.00pm, at the Genesis Cinema. The Cinema, which stands on a site in London’s East End that has had a picturehouse there for the last one hundred or so years, will screen Roger Moore’s fourth adventure as 007 and this will then be followed by interviews with Bill Cartlidge, Paul Weston and John Richardson.

Bill Cartlidge was a Producer on Moonraker, and was previously Associate Producer on The Spy Who Loved Me (1977) and Assistant Director on You Only Live Twice (1967). Veteran stuntman Paul Weston, stunt artist on numerous action movies including the 007 franchise, was the double in Moonraker for the late Richard ‘Jaws’ Kiel, while John Richardson was a highly praised Special Effects technician on the smash-hit Bond film.

Roger Moore’s fourth outing as Ian Fleming’s iconic secret agent, directed by Lewis Gilbert, began shooting in 1978 and co-starred Michael Lonsdale as the space-obsessed villain Sir Hugo Drax and Lois Chiles as space scientist Holly Goodhead. The movie also saw the return of Richard Kiel as ‘Jaws’, who had proved to be such a popular feature of The Spy Who Loved Me with cinema audiences that Bond Producer Albert ‘Cubby’ Broccoli decided Kiel should reprise the role for the next James Bond movie.

The Bond Producer originally contemplated having For Your Eyes Only as the next 007 adventure and, indeed, the end credits of The Spy Who Loved Me in 1977 had announced that ‘James Bond will return in For Your Eyes Only‘. However, in the wake of the massive Star Wars phenomenon at the box office in 1977, and also the mounting excitement over the USA’s developing Space Shuttle project, Broccoli and his advisers at EON decided that it made more sense to go for a ‘science fiction’ dimension to the next film, but also to root it in ‘science fact’.

Ian Fleming’s third 007 novel Moonraker was a fast-paced story set over a short period of time and had at its heart the development of a special rocket project for the British Government in the 1950s. It was to be Britain’s first nuclear missile, based on an upgraded version of the infamous German wartime ‘V-2’ rocket, and part-financed by the rather mysterious multi-millionaire businessman and card-cheat Sir Hugo Drax. Drax, who was assumed by the British Government to have been a British soldier in the War, was in fact a secret former Nazi who was about to turn the new missile on its UK sponsor and launch it directly at London – until he was thwarted, of course, by James Bond and Gala Brand.

EON decided that this could still be the basis of a radically re-imagined new story which would see James Bond actually go into outer space. However, the ‘Nazi’ dimension to Fleming’s original storyline was indirectly retained in the Moonraker screenplay, with Drax having a plan to re-populate the earth with a new ‘Master Race’, and Michael Lonsdale was able to turn in a genuinely creepy performance as the deranged Sir Hugo. The fear of ‘terror’ weapons was also a key theme in the movie.

For financial and tax reasons, the main production of Moonraker was switched from Pinewood Studios in the UK (Bond’s ‘traditional’ production home) to studios in France, where the award-winning set designer Ken Adam was able to build some of the largest sets ever built in a French studio up to that point. The production team on Moonraker were also given special access by NASA to the Space Shuttle project in America and also to previews of design plans for possible future space stations, and there were high hopes on both NASA and EON’s part that the release of the movie would more-or-less coincide with the official launch of the first Space Shuttle.

But the movie, which was premiered in the UK on 26th June, 1979, in a sense, jumped ahead of the American Space Shuttle programme. The first NASA Shuttle (Columbia), due to launch in 1979, had developed teething problems with some of its components, and, in the event, was not launched until 12th April, 1981.

Although Moonraker received mixed reviews from the critics upon its release in 1979, the movie stormed box offices around the world and proved to be very popular with cinemagoers. The sets, model-work and visual designs of the movie were particularly praised, and the special visual effects team of Derek Meddings, Paul Wilson and John Evans were nominated for an Academy Award for Best Visual Effects. John Evans and John Richardson (the latter one of the guests at this Sunday’s Genesis event), were also nominated in 1980 for a special Saturn Award for their special effects work on Moonraker. Richardson went on to become Special Effects supervisor on Octopussy (1983) and A View To A Kill (1985).

Cubby Broccoli, realising EON had pushed the ‘fantasy’ element about as far as they could go with Moonraker, decided that the next movie in the franchise, For Your Eyes Only (1981), would bring Bond very much back down to earth, with a grittier and more story-driven plot. But, in terms of sheer excess and exotic locations, Moonraker remains a highly entertaining entry in the 007 franchise, and many Bond fans were introduced to the big-screen world of 007 via their first viewing of Moonraker.

The influence of both Fleming’s book and the EON movie can also be seen in subsequent Bond movies, especially in Pierce Brosnan’s last adventure as 007, Die Another Day (2002). Neal Purvis and Robert Wade, the screenwriters on the movie, employed a number of unused elements from Fleming’s novel Moonraker, including the London Blades Club. The main villain, Gustav Graves, was also arguably modelled on Sir Hugo Drax. Interestingly, Rosamund Pike, who played MI6 agent Miranda Frost in Die Another Day, has confirmed that she was originally to have played a character named Gala Brand.

Some story concepts originally developed for the Moonraker screenplay, but then dropped, were re-used in later Roger Moore Bond movies, the best examples of this being a sequence with some microlight jets (reworked for Octopussy) and a scene at the Eiffel Tower in Paris (which was eventually used in A View To A Kill).

The famous and spectacular fight in Moonraker between Bond and Drax’s bodyguard Chang (Toshiro Suga) in the Venetian glass museum, was shot at Boulogne Studios (a former German wartime aircraft factory) and set a new record for the largest amount of break-away glass (sugar glass) used in a single movie scene up until that point. At the time, sugar glass was a perfect and popular choice for stunts, although could still lead to occasional accidents if not planned and used carefully. Since then, however, sugar glass has largely been replaced by safer synthetic resins for such stunt work in movies.