Bond is Back – in Paperback 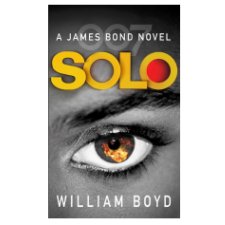 Attractive and exciting new cover designs have been revealed by Ian Fleming Publications (IFP) for the upcoming paperback release of William Boyd’s recent James Bond novel Solo, which is due to appear in paperback in May and June, 2014.

The UK paperback cover design will feature the striking yellow/gold Solo typeface which was such a memorable feature of the hardback edition released last year, but will be combined with elements of the photographic style first seen on the 007 contemporary Vintage Classics Bond covers, which first appeared in 2012.

Moreover, in what is perhaps a nice homage to the original Ian Fleming books, the cover design for the UK paperback of Solo is notably reminiscent of the iconic original artwork designed by the famous British illustrator Richard Chopping for the First Edition of Fleming’s short story collection For Your Eyes Only, published by Jonathan Cape back in 1960. It was Chopping’s third piece of original artwork for the Ian Fleming books.

Chopping (1917-2008), who became something of a legend when it came to designing eye-catching dustjacket designs for a variety of novels, did no less than nine covers for the Ian Fleming novel series overall, starting with From Russia, With Love (1957), then Goldfinger (1959), and moving on to the beguiling ‘single eye’ design for For Your Eyes Only in 1960. After further Fleming designs, Chopping also returned to James Bond for John Gardner’s Licence Renewed (1981), which relaunched the Bond series for a new generation in the 1980s.

The ‘eye’ feature for the UK Solo paperback will be a worthy edition to the numerous Bond cover designs over the years, which have become highly sought after as collectors items in their own right. American readers will find a cool blue-coloured treatment for the U.S. Harper Collins paperback edition.

William Boyd is the latest and most eminent author to have been recruited by IFP to pen a new James Bond adventure. In Solo he produced a stylish and period story, set in the late 1960s and featuring 007 as a veteran agent aged 45. The gritty and realistic story was highly praised by critics.  Boyd was able to combine a very Flemingesque writing form with his own unique interpretation of the character, drawing in particular on a great deal of his own research into both Ian Fleming and the James Bond novels.

For more information on the new Boyd 007 paperbacks, go to: http://www.ianfleming.com