Bond is Back! Craig Bondfest Over Xmas Period

Bond is Back! Break out the Vodka Martinis. It has become something of a tradition that Christmas-time in the past in the UK has regularly seen a James Bond movie as part of the TV festivities.

This year will continue with this trend, with (00)4 films in a Craig Bond festival. James Bond fans in the UK will be given an opportunity by ITV to revisit all four of Daniel Craig’s 007 adventures over the Christmas and New Year vacation period.

The ITV-1 channel in Britain is screening all four of Craig’s movies in consecutive order. The timings are:

Film critic (and 007 fan) Andrew Collins, writing in the Radio Times TV listings magazine, points out that when it appeared in 2015, Craig’s fourth movie as 007, Spectre, was the culmination of a story arc that had started with Casino Royale, and now is a good chance to revisit all the entries in Craig’s tenure as Ian Fleming’s indomitable spy, especially as we await Daniel’s fifth (and possibly final) appearance as 007 in Bond 25 in 2020.

Interestingly, it has just been confirmed that Alexander Witt, who worked on Casino Royale, Skyfall and Spectre, will be 2nd Unit Director for Bond 25. He will be joining Swedish lensman Linus Sandgren, who was recently appointed by director Cary Fukunaga as the main cinematographer on the new 007 movie.

A slight word of caution: ITV-1 has a bit of a history of editing Bond movies when they screen them. When Spectre was premiered on ITV-1 on New Year’s Day 2018, some key scenes were ‘trimmed’, rendering some of the motivations and behaviour of characters (such as Hinx) puzzling to new viewers.

But as long as you take this irritating editing habit into account, you can sit back and enjoy Craig’s 007 in all his glory as you enjoy the festive season. You know the name, and you know the number. And, let’s face it, Xmas would not be Xmas without Mr. Bond. 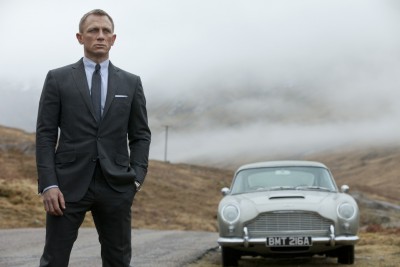