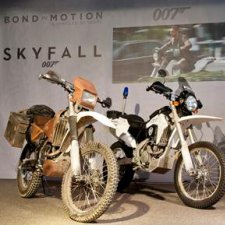 It has been announced that the popular ‘Bond In Motion’ exhibition, which opened in January 2012 at the UK’s National Motor Museum at Beaulieu, will remain open for another year.

The unique exhibition, designed to help celebrate 50 years of 007 on screen, and put together by the National Motor Museum in partnership with Eon Productions, was originally due to end its run in December 2012.

However, in a new press release issued by the Museum, Stephen Munn, Beaulieu’s Commercial Director, said: ‘Since its opening, BOND IN MOTION has been an outstanding success, attracting over 400,000 visitors from all over the world’. He added that the Museum was delighted to now extend the exhibition’s run throughout 2013, to now close on 5 January, 2014.

The exhibition, which has two floor-levels, has 50 Bond-related vehicles and other rare 007 props, and the original opening back in January saw a special press launch attended by a variety of guests from the Bond world, including the Bond women Britt Ekland, Eunice Gayson, Madeline Smith, and Jenny Hanley. Other guests at that original opening event included Colin Salmon, SFX supervisor Chris Corbould, and stunt arranger Vic Armstrong.

The exhibition also contains a small ‘Bond Shop’, with postcards, T-Shirts and other 007 memorabilia, and has a glossy ‘Bond In Motion’ souvenir booklet on sale for £5.00. The enjoyable display has also received wide media coverage since last January, and two of the motorbikes used in the Turkish sequences in Skyfall were added to it during the course of the year.

During 2012, the nearby Buckler’s Hard, located on the banks of the Beaulieu River, which is a unique 18th century village where warships for Nelson’s navy were built, also put on display the Indigenous boat used by Daniel Craig in Quantum of Solace. This will remain on display until 31 December, 2012.

The National Motor Museum is located at Beaulieu in the New Forest area of Hampshire, in England. The Beaulieu grounds include the Motor Museum, Palace House and Gardens, and the beautiful Beaulieu Abbey. Interestingly, during World War Two, the grounds were used as a secret base for Britain’s wartime ‘Special Operations Executive’ (SOE), and trained SOE agents for espionage and sabotage operations in Occupied Europe.