Bond in Motion is Back – in London 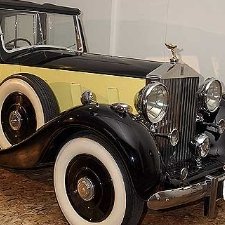 Some extra details have been released on the exhibits that will go on display at the new London Film Museum site of the ‘Bond in Motion’ exhibition, which opens to the general public from 21 March, 2014.

The exhibition, which originally opened at the UK’s Beaulieu National Motor Museum and proved to be such a smash-hit with the public, is the largest officially-sponsored collection of James Bond vehicles in the world, with more than 100 individual pieces.

The London Film Museum has been a hive of preparation activity in recent weeks. According to sources, the new Film Museum location for ‘Bond in Motion’ will include the Wallis autogyro no. G-ARZB (‘Little Nellie’) from You Only Live Twice, Auric Goldfinger’s 1937 Rolls-Royce Phantom III, the Aston Martin DB5 from Goldeneye, and the Jaguar XKR driven by Zao in Die Another Day (complete with gatling gun and heat-seeking missiles).

In addition, the exhibition will display 007’s Aston Martin DBS from Casino Royale, which was used for the now famous scene in the movie when James Bond suddenly swerved to avoid hitting Vesper and, in the process, ended up rolling the vehicle seven times. The latter stunt, carried out by stunt driver Adam Kirley and based on a carefully planned manoeuvre designed by the film’s stunt co-ordinator Gary Powell, broke a Guiness World Record.

Other special treats for visitors to the Film Museum will include Ernst Stavro Blofeld’s ‘Batho-O-Sub’ from Diamonds Are Forever, the Acrostar BD-5J Jet from Octopussy, and the green ‘Q-Boat’ from The World Is Not Enough.

Moreover, there will be the first public display of the one-third scale model Agusta Westland A W101 helicopter used in the filming of the Skyfall Lodge sequence, which formed the dramatic Scottish climax of Daniel Craig’s third Bond movie.

Intriguingly, a spokesman for the London Film Museum told the JBIFC: ‘Keep an eye on 21 March – you won’t be disappointed’.

Further details are at: www.londonfilmmuseum.com