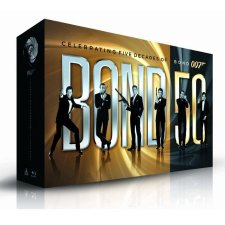 A special James Bond Blu-ray tour has started in the UK, and the first James Bond woman was on hand to launch the event.

The Blu-ray collection used on the tour is contained in a special golden briefcase, introduced to the public recently by Sir Roger Moore.

Bond girl Eunice Gayson, who played James Bond’s girlfriend Silvia Trench in ‘Dr. No’ (1962) and ‘From Russia With Love’ (1963), and recently published her memoirs, launched the official ‘Bond Blu-ray Relay’ at Eileen Donan Castle in Scotland.

The stunning and atmospheric Castle has strong James Bond associations, as it doubled-up as the Scottish HQ of MI6 in ‘The World Is Not Enough’ (1999). Silvia arrived for the special launch event at 9.00am in the Aston Martin DBS from ‘Quantum of Solace’, along with the golden briefcase, and she graciously answered various questions from both the press and some James Bond fans.

The tour then continued, going from the Castle across 200 miles of the rugged Scottish highlands, taking in some of the locations for ‘From Russia With Love’ along the way.

The special Bond Blu-ray tour will then reach England, and will last, appropriately enough, for (00) seven days. Other locations in the seven-day tour will include the Nene Valley Railway, near Peterborough, which was used for ‘Octopussy’ (1983) and ‘Goldeneye’ (1995), and will witness some special displays for the tour by some Bond stunt performers.

The Blu-ray tour will culminate on the seventh day outside the HMV store in London’s famous Oxford Street, with the Aston Martin arriving and parking in front of the flagship store.