Bond Back to Adana 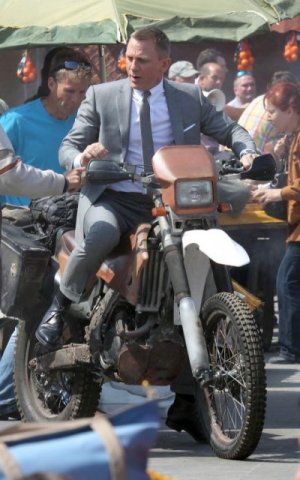 Work in Adana by the film’s second unit began back in March, with various road and train action sequences being shot over the subsequent weeks, including over the famous Varda Viaduct. The unit then took a short break while the main production concentrated on filming sequences in Fethiye and in Istanbul, involving scenes with Berenice Marlohe, Ola Rapace and Naomie Harris.

Last week, Daniel Craig’s services were required by the second unit in Adana, where he carried out some particularly tricky stunts on the top of a moving freight train, sequences which had been rehearsed by stunt doubles a few weeks ago. Daniel’s main stunt double was also on hand to help with the latest filming. This involved Craig appearing to nearly fall over the edge of the roof of the train, and just managing to hang by one hand on to the side of the freight carriage, until he could climb back on to the roof.

Craig was required to wear a safety wire and special elbow and knee pads under his smart grey suit for the stunt, which promises to look stunning in the final film. According to observers at the location, he certainly looked pretty relieved but also elated when the stunt was completed. And who can blame him?

Daniel has been determined to add as much gritty authenticity to his version of 007 as possible, and he has impressed the stunt specialists on set with his preparedness to carry out stunts himself whenever possible. This has certainly won him many new fans. In 2009, for example, when the UK’s ‘Radio Times’ did a survey of the top ten James Bond film stunts, Craig’s stunning crane jump in the opening sequences of ‘Casino Royale’ came out on top in a poll of 1,400 readers.

Meanwhile, Ola Rapace, who was in some of the earlier stunt sequences shot in Adana and was also involved again in the latest train stunts shot in Adana last week, has recently given an interview to IEDb.net, the Internet Entertainment database.

Rapace, who is married to actress Noomi Rapace, plays a particularly ruthless French mercenary in the Turkish sequences in ‘Skyfall’. He revealed that his character will be ‘lethal’, and is one of those characters who is, he said, ‘not afraid of anything. He would go wherever and do whatever and he loves it’.

Asked about Daniel Craig, Rapace commented: ‘I think he’s an interesting actor because he’s got a bit of a contradiction, I think. He’s really tough but he’s still really like got this deepness to him as an actor, too. I like that. For Bond, it takes some drama from the actor which makes it interesting’.

Rapace said his role in the movie had been challenging, but it had taught him alot about acting.