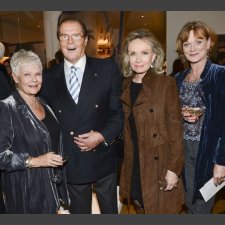 Christie’s auctioneers in London, in conjunction with EON Productions, held an auction of unique James Bond memorabilia on Friday October 5 and helped raise a huge sum for charity.

Also in attendance at the Christie’s auction were the Bond producers Barbara Broccoli and Michael G. Wilson. The glittering evening raised £750,000 for various charities, including Unicef UK, Women for Women, Barnardo’s, ChildLine, and also for funds that help former members of the armed services and Intelligence Services.

The Bond auction attracted strong bidding from a host of wealthy 007 fans and other general film and media people. In fact, the special auction drew bids far in excess of the anticipated sale prices. A set of Ian Fleming books, for example, estimated at between £10,000 and £15,000, eventually sold for an eye-watering £91,250.

Similarly, Judi Dench introduced the blue trunks worn by Daniel Craig from ‘Casino Royale’, quipping: ‘All I’m going to tell you is they’re unwashed!’ Expected to reach up to £5,000, the now-famous La Peria trunks sold for £44,450.

When Sir Roger Moore took to the auction podium and introduced an orchestral version of the ‘Skyfall’ theme song, signed by the singer Adele and her co-writer Paul Epworth, this sold for £13,750. Mischievious Roger entertained the audience by briefly donning a Daniel Craig face-mask while he faced the audience!

Comedian David Walliams, who helped auction the Aston Martin DBS from the Bond movie ‘Quantum of Solace’, also caused great hilarity when he quipped that the proceeds would go to the ‘Roger Moore spray tan foundation’. The 6-litre V12 Aston, which was expected to sell for about £150,000, sold for an amazing £241,000.

It was also very clear from the evening that there is a great deal of interest in anything relating to the eagerly-anticipated third Daniel Craig Bond adventure ‘Skyfall’. A charcoal-coloured suit worn by Craig in the new Bond movie (estimated at £3-5,000), went for £30,000, while Daniel’s dinner suit from the new movie (also estimated at £3-5,000) sold for £46,850. Similarly, an Omega Seamaster Professional Planet Ocean wristwatch worn by Craig in ‘Skyfall’ sold for £157,250.

In addition to the private sale, an online auction of over fifty Bond-related items was open to the public until Saturday October 6. This was also extremely successful. At the public auction, for example, a replica model of the Aston Martin DB5 raised £61,000 for Tickets for Troops.

The chairman of Tickets for Troops, Lord Marland, said: ‘We are absolutely overwhelmed with the amount raised for the charity’.