Bond at 50 in ‘Newsweek’ Magazine 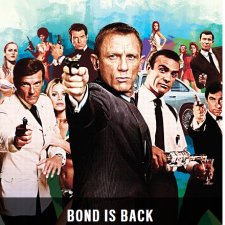 Newsweek has devoted a special essay to ‘Bond at 50’ and the general transatlantic impact of the 007 movie franchise.

Decorated with an attractive James Bond photo-montage front cover, the November 5 issue of the magazine (as might be expected) offers a thoughtful analysis of James Bond. It is an essay written for an American audience, but by a British historian, Simon Schama.

Schama opens his analysis of the Bond phenomenon by arguing that the latest instalment in the franchise, ‘Skyfall’, is (he writes) the ‘cleverest, and most psychologically gripping of all the Bond epics’, which the director Sam Mendes has packed with so many memories that ‘watching it almost feels like experiencing the whole cycle of the films’, from the age of JFK, through the death-pangs of the Cold War, and into the age of cyber-terrorism.

One of the things that also strikes Schama about Skyfall is the sense of what he calls ‘time travel’ at the heart of the new movie: this is especially evident when Craig’s James Bond unveils his Aston Martin DB5 once again. At this particular point in the movie, his boss ‘M’ asks: ‘Where are we going?’, and 007 replies: ‘Back in time’.

This leads Schama to make some interesting points about the possible differences between British and American creative culture. He notes that America ‘has always been about the rush of the now’, whereas almost everything creative in Britain, Bond included, has come from a dialogue ‘between past and future’.

Schama also feels that, compared to some of the earlier entries in the franchise, with new adventure ‘Skyfall’ Daniel Craig and Sam Mendes have aimed for something ‘leaner, meaner, darker, and harder – though the blade edge of wit without which Bond wouldn’t be Bond is still there’.