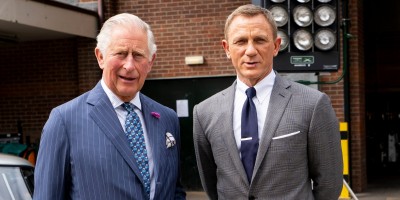 Now pay attention, 007. As one age ends, another one begins.

With the passing of Queen Elizabeth II and the accession of King Charles III to the throne, both the United Kingdom and Ian Fleming’s fictional creation James Bond have reached a watershed moment in Britain’s cultural history.

Britain is changing its Monarch, and the EON Bond franchise is changing its leading actor. There is continuity and change in both camps. In many ways, Bond and the Royals have been been intimately entwined during the evolution of post-1945 Britain. The 007 author’s creation of his now globally famous secret agent coincided with the beginnings of the New Elizabethan Age in the early 1950s, and James Bond seemed to pay modernised post-war homage to the whole notion of ‘Queen and Country’ in his secret battles with the world’s most devious and ruthless villains. As British power waned in real life, Fleming’s fictional creation offered comfort and reassurance to the British public that they still mattered in the world and Bond could save the day on behalf of Her Majesty’s Government.

The very title ‘On Her Majesty’s Secret Service’, coined for Fleming’s 1963 novel, was a clever play by the author on the words ‘On Her Majesty’s Service’ that often adorned the buff-coloured envelopes that contained official government correspondence in the UK.

And the EON film franchise, with its 25 movies all made during the reign of Queen Elizabeth, was increasingly given Royal approval via the regular Royal Premieres attended by the Queen or family members or visits to the set of the latest 007 production by a member of the Royal family. From a marketing point of view, the Royal associations were also brilliant for EON. For the latest movie, No Time To Die, for example, the Premiere at the Royal Albert Hall saw no fewer than four members of the Royal Family in attendance: Kate, William, Camilla and Charles. It was, as the London Metro newspaper put it the next day, a case of ‘On Their Majesties’ Secret Service’.

With the end of the Elizabethan Age, we are also seeing, of course, the end of the Daniel Craig Bond era. The next actor to take on the iconic role will now play Bond ‘On His Majesty’s Secret Service’ i.e. under the reign of King Charles III. Interestingly, it is said that the Queen was something of a Bond film fan herself in private, although she apparently tended to prefer the earlier ones. As a tribute to the late Queen, and the now new King, Charles, the JBIFC has assembled (00)7 facts, some familiar and others less so, about the history of James Bond’s cultural relationship with the British Monarchy.

001: Bond creator Ian Fleming was well aware and clearly very pleased that there were fans of his 007 novels in very high places, including President Kennedy in the USA and the Queen’s husband, Philip Duke of Edinburgh, in Britain. Fleming commented: ‘Of course, it’s very nice to know that a President, Prince Philip and former CIA Chief Allan Dulles enjoy my books. It’s also very good for sales’.

002: The Queen’s husband Prince Philip also indirectly came to the rescue of the third Bond film Goldfinger in the USA. The American censor was very unhappy about the name ‘Pussy Galore’ (played by the late actress Honor Blackman) and wanted it changed. When Honor was photographed being introduced to Prince Philip at the movie’s premiere in London, many newspaper headlines the next day said ‘Pussy and the Prince’, ‘The Prince meets Pussy’ and so on. This enabled Bond producer Cubby Broccoli to show the clippings to the American censor and seek to persuade him that censoring the name ‘Pussy’ in the movie for its U.S. release was not necessary. What was fine for a British Royal was surely fine for an American audience, argued Broccoli. It worked. 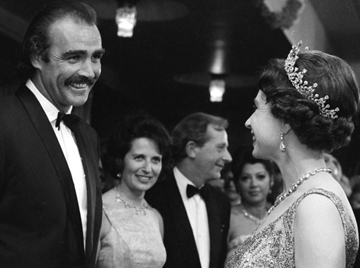 003: Queen Elizabeth met her first James Bond actor, Sean Connery, and his wife Diane Cilento, at the World Premiere of You Only Live Twice in 1967. Her Majesty reportedly asked Connery whether this was really going to be his last film in the role. He confirmed that it was. The next Bond movie, On Her Majesty’s Secret Service (1969), directly tapped into the Royal dimension in a nicely memorable way when an image of the young Queen, hanging on the wall of Bond’s office, was toasted by George Lazenby’s Bond, who apologized for having just resigned from the Secret Service.

004: During production of The Living Daylights (1987), Prince Charles and his then-wife Lady Diana visited Pinewood Studios in December, 1986, to meet the new Bond actor Timothy Dalton, his co-star Mayam d’Abo, director John Glen, producer Cubby Broccoli and others involved in the new film. Charles and Diana were given a tour of Q’s workshop on the Pinewood set, and there was a huge amount of very welcome press coverage of this visit the very next day in the British media after Diana was given the opportunity to smash a prop wine bottle over her husband’s head.

005: In 2002 Queen Elizabeth, along with her husband Prince Philip, attended the World Premiere of Pierce Brosnan’s fourth Bond movie Die Another Day, held (appropriately) at the Royal Albert Hall in London (it was also the 40th Anniversary of the EON Bond films at the time). During production of the movie, Buckingham Palace had granted special permission to the producers for a sequence to be shot outside the gates of the Palace early one Sunday morning (when villain Gustav Graves arrives by parachute to meet waiting reporters). Reports after the Albert Hall Premiere said Her Majesty had really enjoyed the movie.

006: Although she had met new Bond actor Daniel Craig at the Premiere of Casino Royale in 2006, the Royal relationship with the world of James Bond was taken to a whole new level in 2012, the year of Skyfall. Many people were very surprised but absolutely delighted when the Queen appeared on screen with Craig’s James Bond, in a special 007 mini-movie directed by Danny Boyle. This served as the main prelude feature for the opening of the 2012 London Olympic Games, and Her Majesty was seen seemingly leaping from a helicopter and parachuting into the Olympic arena. Even 007 looked bemused!

007: During production of No Time To Die at Pinewood Studios, Prince Charles paid a visit to the set, and was photographed in M’s office meeting Daniel Craig, ‘M’ actor Ralph Fiennes, the director Cary Fukunaga, and Naomie Harris (Miss Moneypenny). Craig was also able to show the Royal visitor some of the Aston Martins used in the new Bond movie (Charles is known to be something of an Aston Martin fan, an interest he shares with Craig). According to Barbara Broccoli, the two men thoroughly enjoyed themselves and, she quipped, were like ‘boys with toys’.

The Queen’s eldest son, Prince Charles (now the new King) was once nearly in a Bond film. Or, to put it another way, a Charles impersonator nearly was. There were early plans for a brief ‘cameo’ appearance by Prince Charles and his then-wife, Lady Diana, for the Vienna sequence in The Living Daylights. Two actors were selected for the roles – Charles impersonator Peter Hugo, and Isabella Connell as Princess Diana. However, the plan was quickly dropped when it was discovered that Hugo had recently completed a prison sentence for assault. 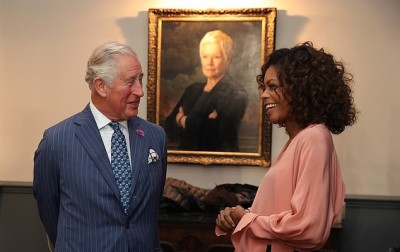 The then Prince Charles meeting Miss Moneypenny on the set of ‘No Time To Die’ (note Judi Dench’s ‘M’ in the painting).