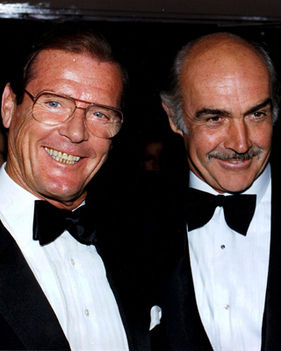 What did Bond 1 really think about Bond 3’s interpretation of 007? After he had completed Diamonds Are Forever (1971), and stepped aside from the role that turned him into a global star, Sean Connery remained notably reluctant to comment on his successor in the role and on Roger Moore’s version of James Bond.

This was not surprising, as Connery and Roger Moore had known each other since the early 1960s and were good friends.

Connery had also become disenchanted with the role of 007, fearing he had become typecast in the iconic role. There had also been tensions with the EON producers over money, with Connery feeling he had not been given the full share of what he was entitled to. As far as Connery was concerned, his time as Bond was now firmly in the past and he had moved on to fresh acting challenges.

However, as the 1970s progressed, and Connery gradually warmed to the idea of his own possible return to the role in an independent non-EON Bond movie, this scrupulous diplomacy concerning the direction of the official 007 movies was slowly cast aside.

Remaining careful not to make any personal comments on his friend Roger, Connery nevertheless had very strong views on how he saw the character of James Bond and what he felt the official series now lacked. A good example came in 1981. At the time, Connery had been increasingly linked to producer Kevin McClory’s proposed independent remake of Thunderball (at that stage titled Warhead), but the project had appeared to stall.

In a rare interview he gave in 1981 to Tony Crawley in the popular British magazine Starburst (no. 42), the magazine of cinema and television fantasy, the first big-screen Bond appeared to drop his usual reluctance to talk about 007. Given to Crawley in the French town of Deauville, where he had just opened the seventh annual American film festival, and where he was promoting his new sci-fi film Outland, the interview began with Connery being asked about the McClory project: ‘Does Warhead still exist as a property that could be made?’ Connery replied: ‘No… Well, yes, it does. But there’s so many legal entanglements that they haven’t resolved yet’.

Connery went on to describe to Crawley the background to how he was drawn back into working on a Bond project with McClory, how he had been attracted at first to working with Len Deighton on the screenplay, and then to possibly resuming the role of Bond himself. But legal problems had forced him to ‘walk away’ from the project two years previously.

Crawley, who had just seen Connery in action in Dr. No in a retrospective of Connery’s movies at the Deauville festival, also asked Connery whether he had enjoyed making the original Bond films? ‘Yeah… The trouble with them was that they got progressively longer to do, which made it more and more difficult to even consider other work’. Interestingly, Connery was also asked about the Roger Moore tenure: ‘How do you feel the Bonds have developed since you quit Her Majesty’s Secret Service? For Your Eyes Only seemed to try, at least, to revert to your style, more direct physical action’.

Connery replied: ‘I’d agree about that. I went to see it last week in San Moritz… It was very kinda pacey and modern and it’s obviously a huge success with all the people going to it, which I think is very good both for the film industry and for Roger’.  However, Connery also observed: ‘But my reservations about it, for my choice, it’s too flippant in the sense of humour. For the sake of a couple of very – I think – cheap jokes, they spoiled a lot of very good sequences. For example, in the very beginning there is a very good sequence in a helicopter, Roger going around in a helicopter being remote-controlled by Blofeld. But then to throw it away with a pay-off like picking up Blofeld and dropping him down a chimney gets a cheap laugh – and credibility goes out the window. For me. That’s my view. But I’m obviously wrong for the film is fantastically successful. That’s the direction it’s gone in – one that I don’t appreciate’.

Remaining on FYEO, Connery was asked whether he had any other examples from the movie? ‘There’s a very, very good sequence of a car chase. You see three or four villains in a car with guns. They come alongside Roger – and he gives them a wave! Well, there’s nothing to stop them blowing him away if they wished. So it defeats the whole purpose of the car chase. You take that wave out of it and it suddenly becomes quite realistic and thrilling and another dimension – from my point of view’.

Quizzed on how he explained the continued success of the Bond films, Connery replied: ‘Yeah, I think that the basic theme, which is still there, goes back to how one person wins through, however extreme and high the odds are… The lone person has to resolve it. With assistance now, of course, of lots of hardware, as they call it’. Hinting that there was now too much hardware, Connery reflected that he would prefer to see ‘more of the loner’ and less mechanicalia: ‘Unless you can explain the hardware in humanistic terms, as we did in Outland. In terms that I could understand!’

After legal problems were eventually ironed out, Sean Connery, of course, did go on to return as James Bond in McClory’s independent 007 movie, Never Say Never Again (an apt title, apparently suggested by Connery’s wife). The movie commenced production shortly after Roger Moore began filming for Octopussy, his sixth adventure as Fleming’s spy in the official EON series. Acutely aware that the press were keen to hype up the two productions as a huge ‘Battle of the Bonds’, Connery and Moore agreed between themselves not to play that game or let any rivalry become ‘personal’. The two actors made it very clear in interviews that they remained good friends and respected each other’s work. A gentlemanly decision was also made not to release both films at the same time, as both sides could see that that to do so could potentially harm box-office revenue. 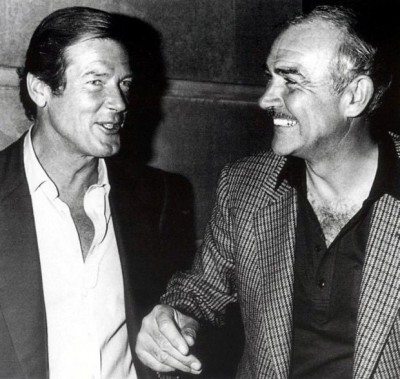