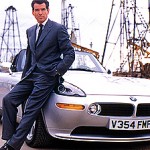 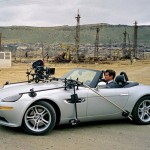 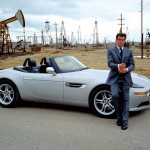 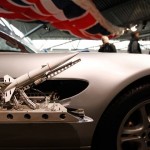 In the 19th 007 film made by EON Productions Ltd., The World Is Not Enough, vehicles from BMW  again made a special appearance.
Bond – played for the third time by Pierce Brosnan, takes to the wheel of a BMW Z8. The car with silver metallic paint with black leather interior trim, has a whole series of hidden extras, including

a remote control and a perfect navigation system,
a hidden rocket-firing station in the car’s side vents,

The filming was done in Baku on the Caspian Sea and at Pinewood Studios in England. Three handmade prototypes worth approximately 700,000 German marks were made available for the filming.  BMW did everything possible to supply a real Z8 for filming but all they could provide in time was the body panels, which were attached onto a Dax Cobra V8 and made to look like the real car. For close-up shots, a full scale model was used.

Sadly the Z8 in the film ends up being sawn in two by gigantic sawblades suspended from beneath a helicopter.