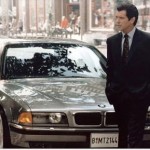 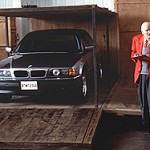 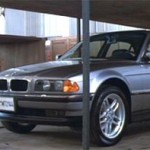 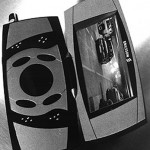 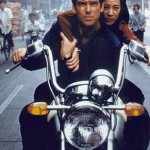 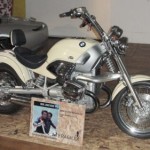 Thanks to the large amount of attention that the BMW Z3 attracted when it appeared in the 1995 film, GoldenEye, both partners were interested in continuing the cooperation. In Tomorrow Never Dies, the screenplay called for Bond to rent a 7 Series sedan at the airport in Hamburg. He is briefed by Q, and becomes involved in a chase that leads into a parking garage. There he gets out of the car and guides it using his specially equipped Ericsson cellular phone until it takes a long fall and lands at one of the car rental company’s branch offices.
On April 23, 1997, the announcement was made in London that the Bavarians would again equip Bond with an official car. The involvement was actually in two parts. First, in the scenes from Hamburg,  models with aspen silver metallic paint are part of the action. These scenes were filmed at Stansted airport in London, Hamburg Fuhlsbüttel airport, the Brent Cross Shopping Center in London, and in downtown Hamburg.

The second part of the Bavarian participation involved the delivery of BMW R 1200 C Cruiser motorcycles, the first chopper that the company from Munich had ever built. With this ivory-colored bike, Bond and his ally Wai Lin (the Malayan actress Michelle Yeoh) flee from the press headquarters of media mogul Elliot Carver (Jonathan Pryce). In this scene, they are chained to one another with handcuffs and race across the roofs of a major Asian city with this handicap. The scenes were filmed in Bangkok and in the Frogmore Studios in England. With a spectacular jump on the BMW motorcycle, they cross a street by flying from roof to roof.