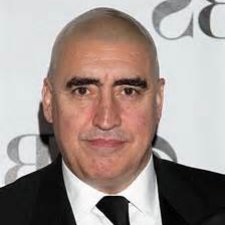 Its that villainous man again. 007’s arch-enemy Ernst Stavro Blofeld is back and will be played by actor Alfred Molina in a new BBC Radio-4 adaptation of Ian Fleming’s classic James Bond adventure On Her Majesty’s Secret Service, which will be transmitted on Saturday, May 3, with Toby Stephens reprising his role as MI6’s top agent.

Stephens, who once played a Bond villain himself, Gustav Graves in Die Another Day (2002), has been James Bond in three previous BBC radio adaptations of Ian Fleming’s best-selling Bond stories, Dr. No in 2008, Goldfinger in 2010, and From Russia With Love in 2012, all produced by Martin Jarvis and Rosalind Ayres.

The same production team has now adapted OHMSS, which is dramatized by writer Archie Scottney, and directed by Jarvis (who will also be the voice of the play’s narrator, Ian Fleming). The new interpretation of OHMSS, as well as having the award-winning stage and screen actor Alfred Molina as Blofeld, will also include Joanna Lumley as Blofeld’s evil German assistant Irma Bunt, and Lisa Dillon as Bond’s wife Tracy. Joanna, of course, was one of the twelve ‘Angels of Death’ in the original EON movie from 1969, which starred George Lazenby as Bond, Telly Savalas as Blofeld, and Ilse Steppat as Bunt.

John Standing will once again play 007’s boss ‘M’ in the new play, Janie Dee is back as Moneypenny, and Julian Sands returns as ‘Q’. Other key roles will be Alex Jennings as Draco, Lloyd Owen as Franklin, Kobna Holdbrook-Smith as Basilisk, and Darren Richardsom as Campbell.

Blofeld’s brainwashed ‘Angels of Death’, who were a major part of the SPECTRE chief’s devious plan to spread a deadly virus across the livestock and cereals of the major economies of the western world, will be played by Joanna Cassidy, Clare Dunne, Lucy Phelps, Katherine Manners, and Hannah Donaldson.

The new interpretation of OHMSS will be very faithful to Ian Fleming’s original story, which saw 007 tracking down SPECTRE chief Blofeld to a mountain-top ‘health clinic’ at Piz Gloria in Switzerland, and also falling in love with Tracy, the emotionally disturbed daughter of Mafia boss Draco.

According to the new edition of the BBC’s listings magazine Radio Times, Molina ‘imparts to Blofeld every square inch of audio evil that he deserves’. Molina has built up considerable experience playing villainous parts, including Dr. Octopus in Spiderman 2.

And listeners are invited to listen out for a knowing reference to Ursula Andress, which was a nice touch originally introduced by Ian Fleming into his novel. Fleming’s book was published in April, 1963, shortly after the first James Bond movie Dr. No had hit the big screen and made Andress an international star.

Did you know? After her final appearance in Fleming’s You Only Live Twice (1964), the memorably sinister Irma Bunt (in a sense) lived to die another day. Fleming biographer John Pearson, who penned the fictional novel James Bond: The Authorized Biography of 007 (1973), resurrected Irma Bunt. In the final chapter of the novel, Bill Tanner describes to Bond an Australian assignment involving Bond’s old nemesis Bunt and the breeding of ‘giant rats’ in the Australian outback. Needless to say, Bond is tempted back for one last mission…