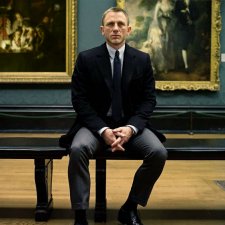 The latest James Bond movie Skyfall, starring Daniel Craig in his third adventure as 007, has now surpassed the astonishing figure of $1 billion at the global box office, which is more than £620m.

According to a Skyfall box office update placed on the official 007.com website on December 30, the new Bond movie, which was directed by Sam Mendes, is also now the most successful James Bond film of all time, as well as the highest-grossing film of all time at the UK box office (being the first movie in Britain to pass the £100 million mark).

The UK figures should come as no surprise. In its first weekend on general release in Britain, Skyfall quickly broke all weekend opening records in the country. Moreover, information released by Eon Productions only a few weeks later revealed that Skyfall had taken a staggering £94,277,612 at the UK box office in just 40 days on general release. This kind of revenue performance was quickly replicated in many other important European markets, and was also repeated in Canada and the USA soon after.

Sony, the movie’s distributor, in its early estimates, had cautiously predicted that the film would make £500m around the world. But other estimates that the new Bond film would break the billion dollar box office mark were being made by Hollywood commentators as early as November 18. This has indeed now happened, and Skyfall appears to be continuing its triumphant performance across all key global markets, the next big one being China early in 2013.

Gary Barber, Chairman of Metro-Goldwyn-Mayer, said in response to the latest news: ‘It is truly thrilling to reach this incredible milestone’. He also expressed ‘tremendous gratitude’ to all the dedicated distributors and James Bond fans across the globe.

The strong performance of Skyfall is already creating some speculation in the media about the next phase in the 007 franchise’s evolution. The latest information from industry insiders is that MGM studio executives are hoping that Bond movie no.24 will be ready for the autumn of 2014, with Bond no.25 ready for 2016. However, it is thought that Eon Productions would prefer 2015 as a more realistic date for the release of the next 007 adventure. Meanwhile, Sam Mendes is apparently mulling over whether to direct Bond 24 or not.

Daniel Craig is to receive an estimated $50m (£31m) to star in the next two James Bond films, which now places him near the top of the Hollywood pay league, and certainly makes him the highest-paid actor in Britain.

All in all, with the success of both the 50th Anniversary celebrations and the amazing impact of Skyfall, the year 2012 undoubtedly proved (to coin a term) that James Bond was well and truly back.