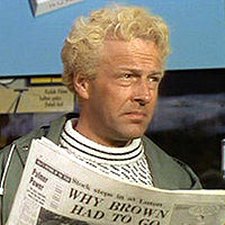 The actor Bernard Horsfall, who played Campbell, the MI6 contact for George Lazenby’s 007 in Switzerland in On Her Majesty’s Secret Service (1969), has sadly died, aged 82.

Horsfall, who was born in Hertfordshire in England in 1930, died on January 29. He began acting in the late 1950s, and made his film debut in the 1957 movie High Flight, which starred Ray Milland. Horsfall went on to take a large variety of parts in film, TV and on the stage. He had roles in episodes of some classic TV series, such as Z-Cars, The Avengers, The Saint (with Roger Moore), and Dr. Who. In fact, he became quite a regular in the Who sci-fi series, appearing in no less than 15 episodes.

In the Bond movie On Her Majesty’s Secret Service (1969), Bernard played a character named Campbell (sometimes listed as Shaun, or ‘Shawn’, Campbell). Campbell is the agent who first helps Lazenby’s Bond by ensuring that a construction site crane lifts a special safecracking device over to 007 at Gumbold’s office in Bern. Campbell also witnesses Bond’s arrival in Switzerland and, disguised as Sir Hilary Bray, 007’s transfer by helicopter to Piz Gloria, accompanied by Blofeld’s assistant, Irma Bunt (Ilse Steppat).

Campbell is later seen trying to take the cable car to the Bleuchamp Institute, but Blofeld’s thuggish henchman Gunther makes it very clear that it is private property (for some reason, this scene was often cut in TV screenings of the movie). Campbell is later captured by Blofeld’s men and is murdered. It was a relatively minor, but nevertheless crucial role in the movie, and reminds us how well the late director Peter Hunt chose his supporting cast.

In February, 2012, the British cable TV channel ‘Yesterday’ screened a welcome repeat showing of the ITV wartime drama Enemy at the Door, which had not been shown for many years. This rather neglected television series, which was about the German occupation of the Channel island of Guernsey, was first screened in the UK by ITV back in 1978-1980. One of the main roles in the 26-part series, that of of Dr. Philip Martell, was played by Horsfall. In what was arguably one of his most powerful TV performances, Horsfall’s character was a doctor trying to carry on with his medical work for the islanders while still facing all the moral dilemmas created by the German occupation.

Interestingly, Enemy at the Door also saw some other Bond-related actors in guest appearances, such as John Rhys-Davies (who went on to play General Pushkin in The Living Daylights). One episode from the second series, entitled ‘The Education of Nils Borg’, first broadcast in March, 1980, is particularly poignant, as it has a key role for Cassandra Harris as Trudi Engel, a seductive official from the German Propaganda Ministry. Harris, of course, just a year later, had to put on a German (or, rather, an Austrian-sounding) accent again when she played the role of Countess Lisl Von Schlaf in For Your Eyes Only (1981).

Bernard Horsfall was a real gentleman with members of the public, and was often very generous with his time, happy to give autographs to fans. RIP, Bernard.