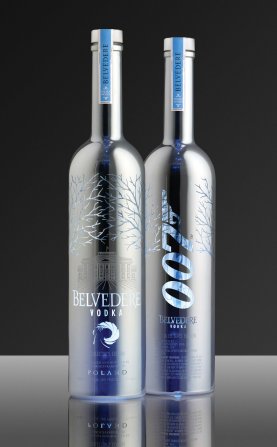 Belvedere will release two custom made, limited edition bottles to celebrate Bond’s vodka martini ‘Shaken not Stirred’, and its partnership with the 24th Bond adventure, SPECTRE. In an unprecedented move, Belvedere has replaced the iconic Belvedere Palace with the famous MI6 headquarters. Belvedere’s signature blue palette will be switched for a distinctive green, mirroring the secret spy agency’s ink of choice, creating a truly memorable collector’s edition of 100 bottles. A 007 twist will also be applied to Belvedere’s iconic Silver Sabre bottles, known for their cutting edge, metallic aesthetic and illuminating technology.

Belvedere’s SPECTRE marketing program will include a global advertising campaign and a wide range of promotion and activation rights around the film. The marketing campaign will be launched as of February 2015, with a strong focus of efforts in on-premise establishments and retail stores across multiple countries. Belvedere is the vodka of choice for tastemakers who Know the Difference, echoing the award-winning campaign promoting knowledgeable choices.

President of Belvedere Vodka, Charles Gibb states: “James Bond is recognised as the most admired and influential tastemaker in the world. We’re delighted that Belvedere will be partnering with SPECTRE, our largest global partnership to date.”

Professor James Chapman, Professor of Film Studies at Leicester University and author of Licence to Thrill, a cultural history of James Bond Films was quoted as saying:

“Bond’s drinking habits have always been a central aspect of the James Bond lifestyle.
Fleming’s Bond famously invented the ‘Vesper’ martini in Casino Royale, and the vodka martini was there for special occasions such as his dinner at M’s club Blades (Moonraker) and his sumptuous dinner with American millionaire Mr Du Pont (Goldfinger). And of course a worldclass super villain such as Dr No would not dream of serving anything else.

“The news that Bond will once again be drinking premium vodka in the forthcoming film
Spectre will be welcomed by all Bond fans as a return to the true 007.”

Follow Belvedere Vodka on Instagram for the latest news about Belvedere’s partnership with Spectre, the 24th James Bond Adventure: http://instagram.com/belvederevodka