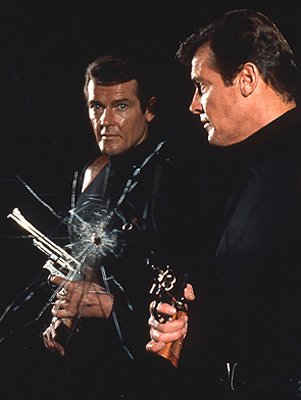 The very sad loss of Sir Roger Moore (1927-2017) has been keenly felt across the movie world and especially amongst Bond fans. His passing has led to a number of tribute articles in the media on his Bond films, including serialisation in the Daily Mail of his book (co-written with Gareth Owen) My Word is My Bond (2008).

But what is sometimes forgotten is that Roger started writing about his time as Bond almost from day one. In fact, he kept a day-by-day diary on his debut 007 movie, Live and Let Die (1973), and this diary was published in the same year as a paperback by Pan Books in the UK, under the title Roger Moore as James Bond – Roger Moore’s own account of filming Live and Let Die.

Long out of print, this book is still well worth a read, and provides fascinating insights on Roger’s early days as 007. The JBIFC recalls some of the reflections given in Roger’s diary on his experiences of becoming James Bond and on the early stages of making his first 007 film.

Roger’s appointment as 007 was first made ‘official’ on 1st August, 1972, when a press conference was held at the Dorchester Hotel, in central London, where the new James Bond was photographed alongside the EON producers Albert R. ‘Cubby’ Broccoli and Harry Saltzman.

The first day of filming on Live and Let Die (LALD) was in fact highly memorable: Roger and the crew were shooting part of the boat-chase sequence about 30 miles outside New Orleans, in a backwater bayou. At one point, Roger said he had ‘a nasty moment’ when, on a sharp bend, ‘my boat headed for the camera boat with Guy and about fifteen people sitting in it’. He managed to come round on the wheel and pull away at the last moment: ‘I fully expected Guy to bawl at me when I got back, but he was very nice and said: “Great, great” ‘.

Roger also recalled that, for the LALD speedboat chase, Hamilton had assembled ‘a small armada’ of high speed motor-boats, together with a small army of seasoned stunt veterans, the latter recruited from both Hollywood and the cream of the film-stunt profession in England. But the director was initially doubtful whether any of scriptwriter Tom Mankiewicz’s ambitious ideas could actually be filmed without killing half of all the stuntmen off! Nevertheless, a combination of Hamilton’s unflappable personality and the sheer guts of many of the stuntmen working on LALD produced some extraordinary results on the screen. As Roger noted, one stuntman, Jerry Comeaux, even set a world record at the time when he took his boat 110 ft (33.5m) over a road.

Writing in his personal filming diary on day number two of shooting, Roger commented: ‘They really are a great crew. The director, Guy, and Bob Kindred, the camera operator, tied themselves on the front of a boat today tearing at sixty miles an hour up and down the bayou photographing close-up reactions of me. That takes a lot of guts’. On day three of filming, Roger noted: ‘I am going to call Guy, our director, the General from now on. He is the complete commander in the field deploying his troops. There must be more than a hundred people on our unit and to get them all working together is no mean feat, especially in this heat’.

Indeed, in Roger’s estimation, Guy Hamilton’s love of anything to do with boats and water became very evident throughout the shooting. On day number 27 of filming, for example, Roger shot some scenes with Gloria Hendry (Rosie) and Roy Stewart (Quarrel Junior) aboard a boat at sea, and reflected: ‘Why I called Guy the General I am not sure because he is in fact a former Royal Navy Officer and he was in his element with our sea shooting’.

Interestingly, what came through strongly in his diary is that Roger’s introduction to the world of James Bond film-making was thoroughly exhausting at times and something of a baptism of fire. Guy Hamilton, a veteran of two previous Bond movies, clearly also recognised how tough it could be, too. Moore told the UK’s Sunday Express in April, 1973: ‘I didn’t realise just how hard it would be. Twenty-two weeks of non-stop action. On the first day of shooting, Guy Hamilton said: “On the last day, you’re going to see a very drunk director”. And I did. He also saw a very drunk actor. We both got paralytic’.

As he recorded in the diary, a big moment for Roger on LALD came when he said his first lines. He recalled: ‘Today is the fourteenth day I have played Bond before the cameras and momentous because I said my first lines’. However, things did not go smoothly – although Roger had learnt a certain set of lines, he discovered there had been some script changes: he had been given the changes but had forgotten to insert them into his own copy of the script!

Another insight into Roger’s early days on LALD was his growing realisation of how the press would be relentless in their pursuit of James Bond film news. Just over two weeks into the location filming, Roger had to face a handful of journalists who were waiting to quiz him about LALD, and, in hindsight, he clearly began at that stage to think about interview techniques that he would go on to develop to perfection on his subsequent Bond movies. As he wrote: ‘I am trying to think of new, bright, intelligent answers to the same questions: “How is your Bond going to be different from Sean’s Bond?” is the inevitable question, to which I inevitably reply, “Well, he is he and I am me”. I get the feeling I always give the same interview; the same answers to the same questions’.

The LALD and Golden Gun director Guy Hamilton nearly directed Roger Moore as Bond for a third time, as he was lined up to helm The Spy Who Loved Me. Hamilton even started some pre-production work and planning on the movie, but when there were long delays due to the break-up of the Broccoli-Saltzman partnership, Hamilton decided to leave the project. However, the choice of Lewis Gilbert as replacement director led to a highly satisfying experience for Roger – and he often commented later that Spy was his favourite and most enjoyable James Bond movie. 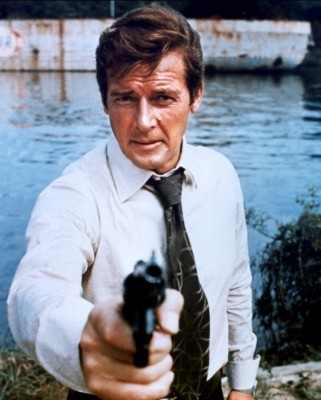