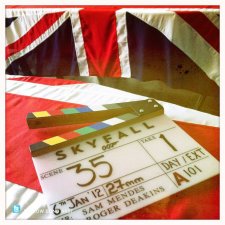 The BBC’s 24-hour TV news channel, in its end-of-year Review, has made the new James Bond film Skyfall one of its top ten films of the year.

Written and presented by the film critic Tom Brook, the BBC news channel’s ‘Review 2012: The Year in Film’, devoted part of its review of the past year in the cinema to a special report about the spectacular success of Skyfall.

Brook, who has been rather negative about the Bond franchise in the past, opened his report by saying that there ‘was strong action in Skyfall but also a compelling story’, and he argued that the new 007 film was a product of ‘a strong writing team and director Sam Mendes’. Extracts from interviews that Brooks conducted with both Daniel Craig and Judi Dench were also included in the ‘Review 2012’.

Craig, in his comments to Brook, strongly emphasized how much preparation had gone into the script for the new 007 movie. He also said Skyfall has ‘real dramatic depth’ but still remains a Bond movie. Asked by Brook about how he now feels about the role of James Bond and the development of the character, Craig responded by saying that he now feels ‘really comfortable with where we have got to’ and the ‘way we’re making these movies really thrills me’. Brook noted that Daniel has signed on for two more Bond adventures.

At one point, Brook touched upon the ‘controversy’ that supposedly surrounded the sponsorship deals and product placement in the movie, but Craig dismissed such views, saying that sponsorship is a ‘necessity’ today if the films are to get made.

In relation to Dame Judi Dench, Brook noted that this was Judi’s final appearance as Bond’s boss ‘M’. In his interview with Dench, noting how she now has a ‘great body of work’, Brook then asked Dench, when she looked back on the Bond films, how did she view that? She responded: ‘I view that as being very lucky’.

Dench said she ‘had no idea’ at the beginning that the part would go on for seven films. She said she was ‘thrilled’ to have done them ‘and they appeal to a much younger audience’ and, as she is interested in getting people into the theatre, then maybe that younger audience would also go the theatre.

In his overall commentary on the films of 2012, Brook noted how, having picked up millions at the box office and ‘glowing reviews’, Skyfall means that James Bond in the cinema ‘is stronger than ever’. Later in his report, offering his own top ten movies of the year – ranked, he said, ‘largely on the basis of their professionalism and originality’ – Brooks placed the latest James Bond movie at no.10 in his own list of the top ten films of 2012.

Appropriately enough, the BBC news channel’s review of the year in film ended with Adele’s powerful theme song for Skyfall.