Spy novelist and Ian Fleming expert Jeremy Duns has published a fascinating new short study of the influence of author Dennis Wheatley on the 007 creator.

Entitled A Spy Is Born: Dennis Wheatley and the Secret Roots of Ian Fleming’s James Bond, the new study traces the life of Wheatley through memoirs, newspaper archives and declassified MI5 (Security Service) files, and raises the possibility that Wheatley’s novels (particularly his Gregory Sallust series) were an influence on Fleming’s own literary career and his creation of secret agent 007.

In the process, Duns also makes a strong defence of Ian Fleming as ‘one of the great writers of popular fiction’, the creator of an iconic character (James Bond) whose appeal ‘still burns bright today’.

As Duns points out in his new book, Dennis Wheatley (1897-1977), who first penned best-selling works of fiction in the 1930s, became a Squadron Leader and later a Wing Commander and then worked at the heart of Britain’s intelligence community during the Second World War. As part of the ‘London Controlling Section’ in Whitehall, Wheatley helped to plan complex deception operations against the Nazis and, in the process, encountered both of the Fleming brothers, Ian and Peter. Ian, of course, worked for naval Intelligence in Whitehall, while Peter worked for the London Controlling Section). 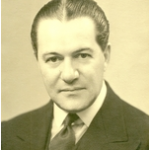 Wheatley (see photo), already a successful author of thrillers and books with occult themes, continued his writing career after the War, and may have been an inspiration for Ian Fleming, who launched his own literary career in the early 1950s. However, whereas Wheatley’s work became somewhat unfashionable and dated in the post-war period, Fleming seemed to be more in tune with the new consumer boom and hedonism of the 1950s and 1960s.

In the process, he managed to combine the worlds of espionage and great story-telling in a short series of novels that captured the imagination of many thousands of readers in ways that perhaps Wheatley was simply unable to do.

Nevertheless, as Duns notes, there may have been important Wheatley-inspired elements in Fleming’s own work. Intriguingly, for example, Fleming – seeking characteristics for some of his own fictional villains in the 007 thrillers – may have drawn upon some of the people Wheatley knew in real life, such as the notorious occultist Aleister Crowley (who was possibly an influence on Fleming’s creation of Le Chiffre, or even Blofeld).

A Spy Is Born by Jeremy Duns is available in both paperback and Kindle editions, and is highly recommended.

One of Dennis Wheatley’s best known occult thrillers was The Devil Rides Out published in 1934. When it was made into a film by Hammer Film Productions in 1968, the two lead roles went to Christopher Lee (who was related to Fleming) and Charles Gray (who had just played Henderson in EON’s You Only Live Twice). Both men went on, of course, to play key Bond villains: Lee became Scaramanga in The Man With the Golden Gun and Gray played Blofeld in Diamonds Are Forever. Double-o heaven!