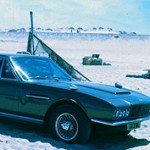 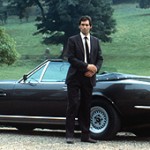 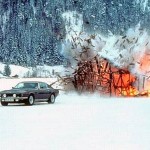 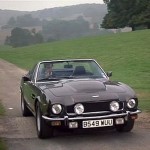 After the great successes in Goldfinger and Thunderball, the Aston Martin models only played minor roles in the next films in the Bond series. George Lazenby, for instance, in On Her Majesty’s Secret Service (1969) traveled on the Portuguese coast and in England in a DBS model. Nevertheless, according to the Aston Martin Owners Club, it was only equipped with a special engine that was installed in the Development Department; other than that, there were no recognizable special effects whatsoever.

Two years later, in the film Diamonds are Forever, which appeared in 1971, another DBS could be seen, but only by very attentive viewers. It was being equipped with rockets in Q’sworkshop, but neither the rockets nor the car were deployed.

Nonetheless, Timothy Dalton’s first deployment on the 007 front turned out to be a major job for this British manufacturer of luxury cars. Two vehicles were used, one softtop Volante version and two hardtop cars. The convertible belonged to the man who, at that time, was the Managing Director of Aston Martin, Victor Gauntlett. The filming was done in Vienna, and in Stonor Park near Henley-on-Thames, England. For the winter scenes, the crew selected the frozen Weißensee in Upper Carinthia. Prior to this, the car was equipped with diverse extras, such as rocket drive (even though it was only a huge gas flame that gave this impression), steel spikes, and a device for cutting through ice. The latter was used to cause a pursuing Lada to break the ice and make acquaintance with the cold water. That scene was created after the fact on the artificial lake at Pinewood Studios, since the ice on Weissensee Lake was 60 centimeters thick in early 1987.
Additional extras in the DBS V8 included the following: It could fire off rockets. A Heads Up Display appeared to show targets on the windshield. The decorative trim turned into snow outriggers that helped ensure that the Aston Martin stayed on track on the ice. In reality, they only be could only be lowered next to the tires. The retracting spikes and the wheel-mounted laser, which was used to cut apart a pursuing police Lada, were special effects that, like many others, were created in the studio. A ramp was built for a jump over a dam.

In addition to the Aston Martin models, two Audi 200 Quattros with stone-gray metallic paint saw action in Vienna and Morocco. A stunt scene with a Land Rover was staged in two parts, first at the end of September and early October 1986 in Gibraltar, and then in December of the same year on the cliff-lined coast of Beachy Head near Eastbourne in Sussex, England. Here, the Land Rover flew dramatically over the cliff and exploded during the fall. The scenes were filmed with 12 pictures per second to help the car speed up.