ALL THERE IS: An opinion on Everything Or Nothing The Untold Story of 007 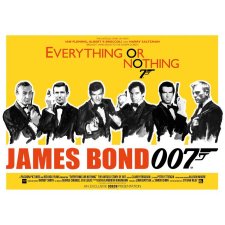 James Bond is too successful for his own good. Throw an ice-cube in a room and it will hit a Bond fan. Any age, any person, any where. They all know about Bond. Or think they do.

Everything Or Nothing, a new feature-length documentary is an insight into the literary roots of the world’s most famous spy as created by Ian Fleming and the subsequent film series initiated by producers Harry Saltzman and Albert R. Cubby Broccoli and now Cubby’s heirs, step-son, Michael G Wilson and daughter, Barbara Broccoli. Almost uniquely for a generation spanning cultural institution which is still hugely commercially successful, the Bond franchise is still a family business. Everything Or Nothing, the retro-nym given to the UK production company which makes the Bond films, EON Productions Limited explores that fascinating journey, cinematically, poignantly, humourously and creatively.

Editor Claire Ferguson has seamlessly crafted from clips from the films, newsreel, home movie footage and some specially shot footage starring Daniel Craig’s stunt double, Ben Cook  – edited in black and white, non-chronologically but craftily to illustrate points from the talking heads.  She brings to life the world of James Bond and how closely it intersected with reality in terms of actual intelligence experience and the lives of his creators. Bond as Fleming manqué is well known but the showmanship of Saltzman and the steady, familial hand of Broccoli is also illustrated. The humanity of these men, their pain and loss, the ebb and flow of their woes and the exhilaration of their unparalleled success is examined with surprisingly emotional results. The contributions of Old Eonians like cinematographer Ted Moore, editor Peter Hunt, writer Richard Maibaum are noted. The film is ennervated by a patchwork of Bond scores from the maestro John Barry as well as George Martin, Marvin Hamlisch and David Arnold as well as other period music. Ferguson editing helps the piece move at a pace, covering dense, complex, nuanced histories easily and entertainingly. Writers Peter Ettedgui (a founder member of the James Bond International Fan Club) and Stevan Riley have condensed the 60 year bible (Fleming wrote Casino Royale in 1952) of the Bond story down to 110 minutes and miraculously nothing feels missing.

Fleming, Saltzman and Broccoli are, alas, no longer with us but archival footage of them speaking about Bond is wonderful to see on the big screen. However, new interviews with George Lazenby, Sir Roger Moore, Timothy Dalton, Pierce Brosnan and Daniel Craig are superb and benefit from not being junket-jolly. The Bond actors share pithy memories and rueful reflections. Other, new behind-the-scenes contributions come from include Lucy Fleming, Peter Janson-Smith and John Pearson (Fleming’s niece, literary agent  and biographer respectively), a particularly insightful, Charles “Jerry” Juroe, veteran Bond publicity guru, Sir Ken Adam, the gun-metal genius behind the Bond sets,  three-time Bond director Lewis Gilbert and his associate producer, William P Cartlidge, United Artists honchos David Picker and Erik Pleskow, Sue St John and Jamie Friend, Saltzman’s assistants and Hilary and Steven Saltzman (Harry’s surviving children) and, of course, Michael G Wilson and Barbara Broccoli who provides the most moving moment in the film. What come across is that despite being the world’s most enduring film franchise, Bond is not the product of a corporation but the bespoke work of a family (actual and spiritual) of film-makers.

However, Everything Or Nothing is not some studio hagiography. The battle for Bond with Kevin McClory is covered in surprising detail as is the “divorce” between Harry and Cubby and Bond’s subsequent, legally enforced hiatus from 1989 to 1995. Connery did not contribute to the film but his presence is felt in wonderful footage including a gasp-inducing but funny dig at Cubby. Everything Or Nothing is gem of a film from producers John Battsek and Simon Chinn, Red Box Films and Passion Pictures and distributed by Sony Pictures and MGM. The documentary obviously benefits from the number of Bond scholars involved with it: Graham Rye, Lee Pfeiffer, Gordon Dale and particularly the editorial consultants, Matthew Field and Mark Mawston. Aptly, cinema historian John Cork is credited the baton of his superlative work on the Bond DVDs has been passed to this film which complements  that earlier work by telling a different Bond narrative. The Blu Ray release of the previous 007 films will be enhanced by this chapter in the Bond story.

When we sit down to enjoy Skyfall from 26th October 2012, the memory of Everything Or Nothing will be coursing through our minds, adding to the fun that is the incredible world of 007. Credit for this superb documentary should be heaped like Beluga caviar on co-writer and director Stevan Riley who has approached the subject with the distance and skill of one of the finest documentarians making films today. Sterling work, Mr Riley. Robert Sterling work!