A View to a Thrill: Sony ‘Made for Bond’ launch

Naomie Harris, who was Miss Eve Moneypenny in Skyfall and reprises the role again in the upcoming SPECTRE, was a very special guest at the launch party of the Sony technology ‘Made for Bond’ campaign, held in central London.

The James Bond films are, of course, renowned for their use of the latest technology and this hi-tech reputation was very much reinforced at the launch evening, which was held on the evening of October 12th at The Mondrian, overlooking the River Thames.

While Naomie and other celebrity guests helped celebrate and promote Sony’s ‘Made for Bond’ range of products, including the RX100 IV camera and the Xperia Z5 smartphone, they were also entertained by the popular hip hop and funk DJ Goldie (who, Bond fans will recall, had a role in the James Bond movie The World Is Not Enough in 1999).

The evening’s guests were also able to enjoy sipping on Belvedere Vodka Martinis, Heineken and glasses of Bollinger Special Cuvee, which are all products associated with SPECTRE. At the same time, they could take in the stunning views of the River Thames, which has featured heavily in the world of Bond on screen, including for some key sequences in SPECTRE. By day it is one of Britain’s busiest waterways, and by night the river is a filmmaker’s dream, with some breathtaking visual possibilities, including numerous embankment lights reflecting in the water, a series of iconic bridges, and some very famous buildings nearby, something director Sam Mendes took full advantage of for the 24th 007 adventure.

According to the JBIFC’s secret informants, the partygoers at the Sony launch event were also given the chance to test out Sony’s new technologies that have been ‘Made for Bond’, including the RX100 IV camera and the Xperia Z5 smartphone, both of which are superb pieces of equipment, worthy of any MI6 superspy. Miss Moneypenny was especially impressed. Naomie Harris said: ‘It was great fun tonight to take pictures of the guests and the photographers with my RX100 IV – it’s nice to see the roles reversed! Ultimately, at the centre of Bond is Britishness, so at the launch party we wanted to celebrate just that’.

As many Bond aficionados are now aware, the Sony ‘Made for Bond’ ad campaign has seen posters of Miss Moneypenny placed all over London, including on the sides of red buses, at bus-stop shelters, large poster sites, and on the Underground rail system. The impressive advertising campaign also has a glossy tie-in short film, which follows a tense chase across London’s South Bank and over the footbridge that leads to St.Paul’s Cathedral, as Moneypenny evades some mysterious henchmen to sucessfully deliver Bond’s Xperia Z5 smartphone.

The ad film was shot over two very hot days in the summer just as the SPECTRE second unit were finishing off their own River Thames filming further up the river.

SPECTRE will premiere at the Royal Albert Hall in London on October 26th. Are you ready? 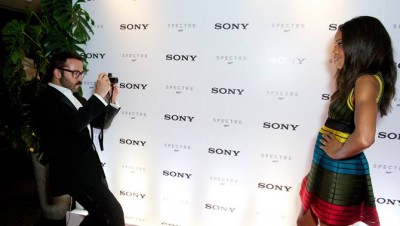 Naomie Harris at the Sony ‘Made for Bond’ launch evening (image by courtesy of Sony).