A View on a Thrill: Looking Back on Bond 14 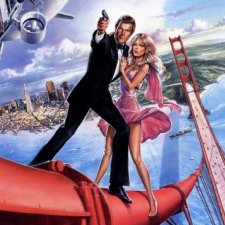 This year marks the 30th birthday of A View To A Kill (1985), Roger Moore’s seventh movie as James Bond and his final thrilling outing in the iconic role, marking the end of his 12-year tenure as 007.

To help celebrate this year’s special thirtieth anniversary of the fourteenth EON Bond film, the JBIFC looks back on some of the familiar and less familiar aspects of Roger’s last adventure as Ian Fleming’s secret agent.

Our brief retrospective celebration is arranged under (00)7 bullet points.

001: The film took its amended title, but little else, from a short story that originally appeared in Ian Fleming’s short-story collection For Your Eyes Only (1960). The Bond author had developed ‘From a View to a Kill’  from a story outline he had put together for a half-hour episode in a proposed CBS James Bond TV series, a project that never came to fruition.

002: Richard Maibaum and Michael G. Wilson penned the script, and the central theme of the movie – a plot based around an attempt to disrupt Silicon Valley – was Wilson’s idea. One early idea for this had millionaire industrialist Max Zorin attempting to manipulate the course of Halley’s Comet to crash it into the valley!

003: Some of the scenes for the movie were taken from unused story elements developed for previous Roger Moore James Bond films: the idea of a brooch killing 007’s contact in a restaurant at the Eiffel Tower, for example, was originally in one of the early Moonraker screen treatments.

004: The snow-bound Siberian pre-titles sequence was originally planned to be shot in some snowy mountain locations in Scotland, but before Willy Bognor’s ski unit could go ahead some unseasonably warm weather had caused the snow to melt! The unit used Iceland and Switzerland instead.

005: The Silver Cloud Rolls-Royce driven by Patrick Macnee (who played Sir Godfrey Tibbett in the movie) actually belonged to Bond producer Albert ‘Cubby’ Broccoli, who (naturally!) kept a close watch on his beloved car. The scene where the Rolls was submerged into the water was shot in England, and the crew made sure they used a duplicate car.

006: According to director John Glen, when they were on location filming at Fisherman’s Wharf in the USA, former two-times Bond woman Maud Adams visited the set. ‘Why don’t you walk through the background in one of the crowd scenes?’, Glen suggested to her. ‘That way you can say you’ve been in three Bond films!’ And she did!

007: The exteriors to Max Zorin’s mine were shot in England – over the course of five days at Amberley Chalk Pits in West Sussex. At one point, when Roger Moore was being interviewed at the sunny location by a journalist for a British newspaper, 007 was ‘buzzed’ by a rather angry insect! Roger used his cigar as a defence. The accompanying press photographer was – unsurprisingly – delighted with the unusual photo op.

Bond producer Cubby Broccoli had originally suggested that singer David Bowie would be ideal for the role of Zorin, especially because of his ‘different-coloured eyes’. Michael G. Wilson was also keen, having seen Bowie in Merry Christmas Mr. Lawrence.

It is now known that Bowie was sounded out and spoken to, and was indeed interested in the role, but his commitments to an extensive concert touring schedule precluded him in the end.