007 writers interviewed in ‘MI6 Confidential’ no.24 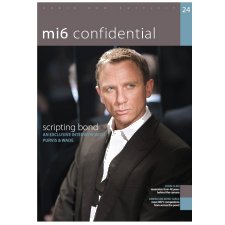 MI6 Confidential magazine, which is on sale through the JBIFC, includes an interesting interview with former Bond scriptwriters Neal Purvis and Robert Wade, given as they moved on from 007 storyline duties after Skyfall.

The latest edition of the magazine, which is no.24 in the series, quizzed the two writers about their key roles in shaping and scripting five James Bond movies, together with their contribution to developing the defunct 007 spin-off movie Jinx, which was based on Halle Berry’s CIA character Jinx from Die Another Day, and was to star Berry in the title role.

Among the gems in the new interview is the fact that Purvis and Wade, when first approached to helm Bond 19 in 1999, proposed taking James Bond back to his roots in Casino Royale, but Barbara Broccoli and Michael Wilson had to point out that (at that stage) EON did not own the rights to Fleming’s first book. Instead, the writing pair had to develop a whole new story for their first Bond script, which became the basis for The World Is Not Enough.

The writers also responded to long-standing rumours that they had long wanted Javier Bardem to take a role in a Bond movie, confirming that they had suggested the Spanish actor for roles well before he was finally offered the role of main villain in Skyfall.

They also revealed how they felt Die Another Day, once production had started, had ended up going in a direction that they had not really intended or anticipated: Robert Wade said that during production the movie ‘started getting bigger and more of a celebration of Bond’s 40th anniversary’, while Neal Purvis conceded that the movie ‘did get a bit over the top’.

Following on from this, however, their work on Jinx, the proposed spin-off movie, was intended to take a more down-to-earth For Your Eyes Only style of direction. But MGM’s financial difficulties at the time helped pull the plug on the proposed movie, even though Halle Berry was ‘keen to do it’.

Purvis and Wade also offered some interesting comments on how they had originally envisaged Quantum of Solace to be much more of a direct sequel to Casino Royale but, according to Wade, what they had not ‘really counted on was that you get a different director and he doesn’t necessarily want to make part two of Martin Campbell’s movie’. Direct links to Casino were thus really cut down.

Asked to cite some of their favourite moments from Bond as they depart from 007 writing, Purvis said one highlight for him was attending the Albert Hall premiere of Skyfall, while Wade pointed to the last ten seconds of Casino Royale.

Other articles in the new issue of MI6 Confidential include ‘Licence to Thrill’ (on the casting of Carey Lowell and Talisa Soto for Licence to Kill); ‘How to Eat like James Bond’; an article on how the public reacted to Daniel Craig’s grittier version of Bond; a profile of Denise Richards; an interview with director John Glen; an article on the ‘Best of Barry’ (highlighting some of his best Bond compositions); and ‘The Bond Connection’ (which explores the making of the new Fleming biopic).

MI6 Confidential no.24, edited by Hugh Maddocks of the MI6 team  – click here to purchase now.