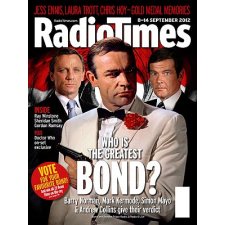 The new edition of the BBC’s popular ‘Radio Times’ TV and radio listings magazine is a James Bond special.

The magazine, which covers the British TV and radio listings for the week 8-14 September, has an attractive gun-barrel background on its front cover, featuring Daniel Craig, Sean Connery, and Roger Moore. It also poses the question ‘Who is the greatest Bond?’

Inside the new ‘Radio Times’, readers can find an article by the BBC’s film critic Barry Norman, who sets out his enduring interest in 007 over the years. At one point he reveals that his father, Leslie Norman, was on the short-list to direct ‘Dr. No’. He also recalls his first meeting with Sean Connery in 1961, and his interview with Roger Moore when the third 007 was filming ‘Moonraker’ in Rio de Janeiro in 1979. Just before the interview, Cubby Broccoli apparently asked Norman: ‘Ask him – ask him if he’s going to do the next movie’. So Norman did, and Roger came out with a characteristic quip, leaving a frustrated Cubby none the wiser!

The magazine also contains an article featuring the radio presenters Mark Kermode and Simon Mayo, who describe their love of the Bond films over the years. They will be the hosts of ‘Bond and Beyond’, two BBC radio specials, which will be transmitted on BBC Radio-5 at 2.00pm on Friday, 14 September, and on the same day at 8.00pm on BBC Radio-2.

In the first part, at 2.00pm, they will team up with the BBC Philharmonic Orchestra to celebrate the music of 007, and, later in the evening, the second part at 8.00pm will a ‘Friday Night is Music Night’ James Bond special, showcasing music from the James Bond series and a variety of spy movies, but mainly including, of course, the 007 films. The interlude will also feature a previously unaired 2011 interview in which Paul Sexton talks to the late John Barry.

Finally, the new ‘Radio Times’ also features an article by Andrew Collins, who asks: ‘Who is the best Bond?’, and invites readers to make their selection in a competition which offers a ‘Bond at 50’ Blu-ray collection (which officially becomes available to buy on 24 September).

The new edition of ‘Radio Times’ is on sale at newsagents in the UK now, priced £1.40.