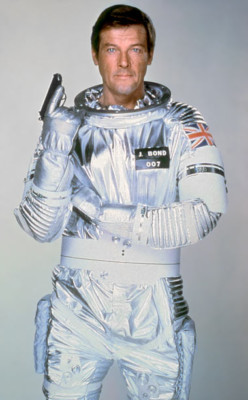 Now pay attention, 007. Eyes Only. A special decoded message from ‘Q’ follows: The James Bond franchise has often been called ‘spy-fi’, as it has regularly fused spy fiction with science fiction.

An exciting new book, The Science of James Bond, penned by science writer and lecturer Mark Brake, lifts the lid on the full extent to which the world’s most iconic fictional secret agent has engaged with science and technology over the years, together with his encounters with super-villains who have often tried to employ hi-tech means to achieve their demented ambitions.

The new book, which is also subtitled The Super-Villains, Tech, and Spy-Craft Behind The Film and Fiction, offers three detailed sections, covering the franchise over the periods 1962-1977, 1979-2002, and 2006-2019. As Brake explains in his introduction, the book treats the 007 franchise as spy-fi, ‘a genre of fiction that fuses spy fiction with science fiction, taking on board Sci-fi’s obsessions with super-villains, the future, world domination or destruction, and trends in science and tech, often in the form of gadgets, inventions, and spy devices’.

Brake notes that one of the most obvious aspects of the James Bond franchise that qualifies as sci-fi is its fixation on gadgetry. Think, for example, about Bond’s gadget-laiden escapades in Goldfinger or Thunderball (such as Bond’s ‘modified’ Aston Martin, or the Bell jet-pack, or the underwater breathing device), or the much larger items of hi-tech equipment Bond has often used, such as the Wet-bike in The Spy Who Loved Me, or the Q-Boat in The World Is Not Enough, or the ‘invisible’ car in Die Another Day. 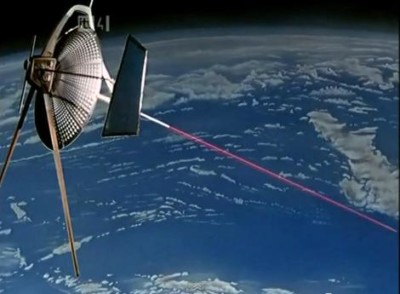 Similarly, the films have also used the ‘spy-fi’ genre to pit secret agent 007 against a range of enemy super-villains or masterminds, usually involving themes or settings rooted ‘in the outright fantasy’ of sci-fi or science fact.

Dr. Julius No was determined to topple the Project Mercury rocket launches, while Ernst Stavro Blofeld wanted to use space rockets to ‘kidnap’ American or Russian rockets to cause a World War; both Auric Goldfinger and Blofeld appeared to have a fondness for laser beam weapons, while Stromberg and Drax sought to build empires either underwater or in outer space. Mis-use of atomic power or weapons has also been quite a habit on the part of some of the key villains in the 007 adventures. Even ‘information’ and news itself has been weaponized in Bond’s world: think, for example, of Elliot Carver and his Carver Media Group network in Tomorrow Never Dies.

Yet, at the same time, the Bond movies often draw upon some scary reality when constructing such fantasy, and the films have often tried to stay one step ahead of all the latest technological or scientific innovations. In The Man With The Golden Gun, for example, the real-life energy crisis of the mid-1970s formed the backdrop to the plot. At the same time, Scaramanga regarded it as a nice ‘bonus’ of the new Solex Agitator energy project that he now had personal access to use of a ‘golden’ gun powered by the rays of the sun itself.

Similarly, in Goldeneye, a secret Russian space-based weapons system is hi-jacked by a private crime syndicate (playing upon the nervousness people had about the chaos in some parts of the former eastern bloc in the post-Cold War world of the 1990s), while the real-life Arecibo Radio Telescope dish in Puerto Rico doubled in the same movie as Cuba for the climax of the story, where Alec Trevelyan attempts to use the (then) new technique of ‘hacking’ via the (then) new digital technology of the internet to get his revenge on Britain. Interestingly, this ‘realistic’ angle was updated (in a sense) in the cyber-terrorism seen in Daniel Craig’s Skyfall.

Brake takes the reader on a detailed and entertaining journey through the ‘sci-fi’ aspects of each of the Bond movies in turn, starting with Dr. No in 1962 and ending with Spectre in 2015. Although it is not covered in this book, it will be fascinating to see what ‘science’ elements are used in the upcoming No Time To Die released later this year.

JBIFC verdict: If you like fast-paced books that give fresh or unusual takes on the James Bond franchise, then this is the book for you. The lack of illustrations is more than made up for by a writing style that is informed and interesting, with a solid knowledge of the world of 007. 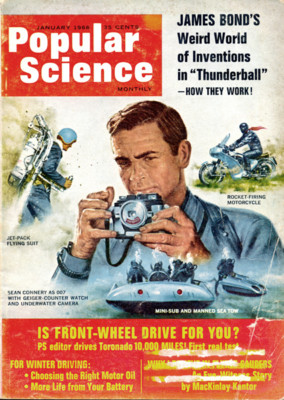 Cover to a now rare edition of ‘Popular Science’ from 1966.