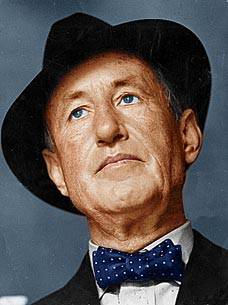 The recent coverage of the latest James Bond movie Spectre also saw much interest once again in Ian Fleming, the original creator of 007, and this was helped along nicely by the publication of a collection of his letters, edited by his nephew Fergus Fleming.

First published by Bloomsbury in October, 2015, The Man With The Golden Typewriter: Ian Fleming’s James Bond Letters, has now appeared in a new paperback edition (also from Bloomsbury), and is something of a must-have purchase for Ian Fleming and James Bond aficionados.

Fleming, who was a working journalist as well as a novelist, took a keen interest in people, locations and ideas, and went to great lengths to keep precise notes about anything that caught his imagination. These often became vital source material for his 007 novels and short stories. At the same time, he was quite a prolific letter writer, seeking out further information for his novels, or responding to questions from the fans.

This new collection of his correspondence brings together many of the letters he wrote which focus specifically on his literary creation, James Bond: these include numerous letters to his publisher, often dealing with technical and other aspects of the 007 novels – changes to text, the dust-jacket designs, the size of the print-runs, the type of publicity to use, and so on.

The collection also has other letters Fleming wrote to his friends, readers, and other contacts, and some great examples of letters that were written to Ian Fleming. The collection includes, for example, the now famous exchange of letters that Fleming had with Geoffrey Boothroyd, a gun specialist in Glasgow. Boothroyd so impressed Fleming with his advice on guns that a key part of this expertise was integrated into his 1958 Bond novel Dr. No.

In fact, the sixth novel Dr. No itself generated some other equally fascinating correspondence, including some letters from Fleming’s close social ‘inner circle’. Fleming’s friend William Plomer wrote to the Bond creator in June, 1957: ‘I’ve greatly enjoyed Dr. No – and so will, I hope, millions of other readers… I think my favourite moment is when Dr. No taps his contact-lenses wit his steel claws. (I’ve been practicing with my biro on my spectacles but it doesn’t ring true)’.

Similarly, the playwright Noel Coward (who lived in Jamaica, not far from Fleming’s bungalow Goldeneye), also penned a letter in May, 1958, where he offered his reaction to the latest Bond novel: ‘I have read Dr. No from cover to cover and thoroughly enjoyed every moment of it… I am willing to accept the centipede, the tarantulas, the land crabs, the giant squid… but what I will neither accept nor forgive is the highly inaccurate statement that when it is 11am in Jamaica, it is 6am in dear old England… it is carelessless of this kind that makes my eyes steel slits of blue’.

There is also an interesting letter penned by Fleming himself in October, 1961, in relation to the production of the movie version of Dr. No. When the film shot on location in Jamaica, Fleming used his connections to secure a production assistant’s job on the movie for Christopher, the son of his mistress Blanche Blackwell. Chris Backwell (who later went on to become a famous and highly successful record producer) helped the crew find suitable locations on the island. Fleming’s letter also anticipated another role for Chris: ‘They also want to do all their musical score for the picture in Jamaica, and this should be a real chance for Christopher to seek out talent and lease them his recording studio…’.

Fascinatingly, the same October, 1961, letter has Fleming’s thoughts on the actor who had been awarded the role of 007: ‘The man they have chosen for Bond, Sean Connery, is a real charmer – fairly unknown but a good actor with the right looks and physique…’.

Two short letters by Ian Fleming, written in response to ones sent to him by Bond fan Dr. G. Gibson, were offered for auction at Bonhams in London in late 2015. In one letter Dr. Gibson sent to the Bond author, he asked Fleming whether 007 had survived after being poisoned at the end of the 1957 Bond novel From Russia With Love.

The James Bond author responded that ‘a note’ had been posted in the canteen at the Secret Service HQ near Regents Park saying that 007 was on the mend and would be returning to ‘active duty’. The sixth Bond novel Dr. No duly appeared six months later. 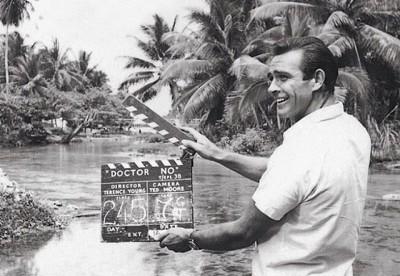 Sean Connery on the set of Dr. No on location in Jamaica