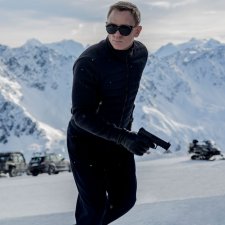 The exciting new Austrian-based James Bond exhibition ‘007 Elements’, which opens on July 12th and promises to be the ‘ultimate Bond experience’ for visitors, has received an early review from the London Times newspaper.

The new Bond experience, which the newspaper notes is designed as a ‘cinematic installation’ rather than as a more conventional type of museum, includes an introductory film by director Sam Mendes (who directed the last two 007 adventures, Skyfall and Spectre), and a variety of gadgets and vehicles from the EON James Bond franchise are on display.

Originally announced in 2017, the eagerly anticipated installation is located at the top of the Gaislachkogl Mountain next to the eye-catching ICE Q Restaurant in Solden, Austria. The iconic location was, of course, used for some key sequences by Sam Mendes for Spectre and doubled-up in the movie as the Hoffler Klinik (where Daniel Craig’s 007 met Madeleine Swann). As many Bond fans know, part of the snow chase was also shot just outside the building and nearby.

The new exhibition has been housed in a bespoke new building, which is embedded (in true 007 tradition) into the top of the mountain, and was designed and built by the award-winning architect Johann Obermoser. The space is inspired by the work of the legendary 007 set designer, the late Sir Ken Adam. The actual concept for the installation has been designed by James Bond art director Neal Callow, who worked on the last four Craig Bond movies and, according to the latest reports, will also work on Bond no. 25. According to the review in The Times, Callow said that all the displays in ‘007 Elements’ have been tailored to show the legacy of the films in a ‘modern’ way.

The newspaper notes that the new installation includes the remnants of the aircraft that 007 crashed into a log cabin during the climax to the snow chase in Spectre, while other exhibits include the ski pole gun used by Bond in The Spy Who Loved Me (1977), Francisco Scaramanga’s famous golden gun from The Man With The Golden Gun (1974), and the snooper dog robot used by ‘Q’ at the end of A View To A Kill (1985).

According to The Times, visitors to the new installation will be encouraged to come in skiwear because the building will be kept cold to prevent the foundations from melting the permafrost. Callow told the media: ‘It’s an authentic James Bond location. We wanted people to feel like they’re walking through the world of James Bond while learning about how the films are made in a new and modern way’. Thus each room, the paper observes, tackles a theme such as the music, the characters, the locations, the gadgets and action sequences.

Mr. Callow also explained that the minimalist design was intended to reflect a Bond villain’s lair: ‘The archetypal Bond villain, like Blofeld, could easily live here. It’s inside the top of a mountain. You don’t get more James Bond than having a building inside a mountain’.

Perched at over 3,000 metres, with some spectacular and panoramic views across Austria, Germany and Italy, the nearby ICE Q restaurant will also be a big temptation both for dedicated 007 fans and more general visitors after they have experienced ‘007 Elements’. Tourist bosses in the Austrian Tyrol area are also confident that the new James Bond installation will strengthen Solden’s great position as a year-round destination for sports and entertainment.

As Blofeld himself might say, they’ve been expecting you, Mr. Bond. 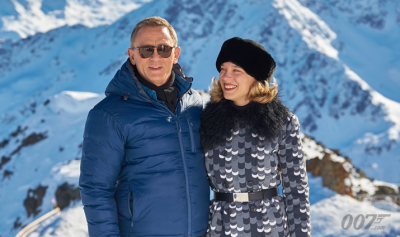 A press call during the production of Spectre in Austria