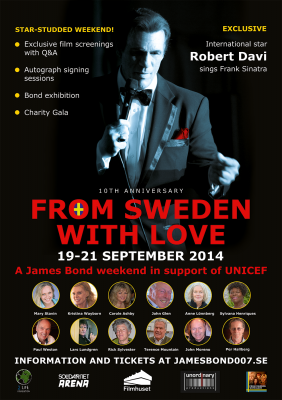 Do you fancy a trip to the beautiful country of Sweden? Our good friends at the From Sweden With Love (FSWL) website, Sweden’s premier 007 fan site, have organized an exciting ‘James Bond Weekend’ for 19-21 September, 2014, with a range of special guests from the world of 007. Dedicated Bond fans from various countries will also be attending.

The special weekend, which is in aid of the children’s charity UNICEF, is the result of months of hard work by Anders Frejdh. It will have exclusive James Bond film screenings, with Q&A sessions; autograph signing sessions; a James Bond exhibition; and a charity gala event.

And, as a very special treat, there will be some live Frank Sinatra songs performed by none other than Robert Davi, who played the main villain Franz Sanchez in Licence to Kill (1989). Yes, you read that correctly: as well as being a major movie actor, Robert Davi’s other talents include having a great singing voice. In fact, he has been called by his fans ‘The Man with the Golden Voice’. And, in a sense, this is something of a premiere for Davi, as he has never sung in Europe before.

Further details about this superb James Bond Weekend can be found at:

Details about hotel accomodation can also be found at the FSWL site.

The children’s charity UNICEF is the world’s leading organisation for children and child rights, covering an estimated 190 countries. Former James Bond actor Sir Roger Moore was appointed a UNICEF Goodwill Ambassador in 1991, and is a steadfast advocate for children. In fact, he has said he is really proud of his UNICEF role and is ‘passionate’ about children’s rights and welfare.

In 2012, in recognition of his 21 years service working for UNICEF, Sir Roger was presented with the UNICEF UK Lifetime Achievement Award at a special ceremony in London.