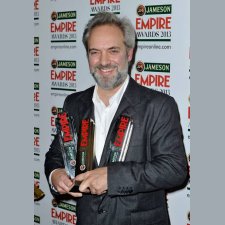 Director Sam Mendes, speaking after the triumph of Skyfall at the 2013 Jameson Empire Film Awards ceremony held in London, said he has ‘definitely’ left the door open to doing another James Bond movie in the future.

The Awards evening, organized by the popular British movie magazine Empire in conjunction with Jameson Irish Whiskey, was attended by a wide range of the great and the good from Britain’s film industry. Moreover, the special event saw not only Mendes in attendance but also the Bond producers Michael G. Wilson and Barbara Broccoli, as well as the Skyfall screenwriters Neal Purvis and Robert Wade.

After being presented with his awards by the actor and director Kevin Spacey, Mendes made a short acceptance speech live on stage, and said he was ‘very flattered indeed’ to be considered an inspiration to anyone. He also particularly thanked Empire movie magazine who, he said, had ‘fearlessly supported’ Skyfall all along. Mendes also read out a list of people and film scenes that he said had inspired him personally to become a filmmaker, including Stanley Kubrick and the ‘War Room’ in Kubrick’s nuclear war satire Dr. Strangelove (a set that was designed, as many Bond fans know, by the great Sir Ken Adam). Other sources of inspiration for Mendes had included Ingmar Bergman, Francis Ford Coppola, and the Coen Brothers.

Interviewed after he picked up his awards for Best Director and the special ‘Inspiration’ award, Mendes said that it has been ‘great and fantastic’ that Skyfall has won so many awards. Responding to a question about his recent decision not to direct Bond 24, Mendes said that the Bond producers had been ‘very sweet’ about this. He explained that Skyfall had taken a lot of hard work and he did not want to ‘repeat’ himself, and he currently has some other projects he wants to concentrate on. Concerning the future, he added: ‘I’ve definitely left the door open for the possibility of a Bond movie’, but, regarding Bond 24, he pointed out that the Bond producers really needed someone working on it ‘now’ i.e. over the next year, for ‘pre-production’ purposes.

Michael G. Wilson, also interviewed after the awards, along with Barbara Broccoli and Purvis and Wade, said the Empire awards for Skyfall were the ‘cherry on the cake’ because the evening constituted the last round of major movie awards and also, more importantly, they were ‘from the public’.

Inevitably, Wilson was also asked about whether they had found a director for the next Bond film or had anyone in mind yet. He chuckled and said they were still hoping to get Mendes back! Purvis and Wade, also facing similar questions about their recent decision to take a break from Bond writing, were also ‘wooed’ on the spot by Barbara Broccoli, who made it clear that she would like them to return at some point.

The Empire film awards began in 1996, and the magazine is Britain’s biggest selling movie magazine. The awards are voted on by thousands of the magazine’s readers, so the latest awards for Skyfall and Mendes are a resounding vote of appreciation from the general cinema public in Britain. The awards this year were co-sponsored by John Jameson (JJ & S) Irish Whiskey.