Memo from Moneypenny: ‘Very good chance’ Daniel will be back

Naomie Harris has said that she thinks there is ‘a very good chance’ that Daniel Craig will return as James Bond. She was responding to the question that has inevitably faced a number of members of the 007 support team over the last year or so, as intense speculation has regularly occurred in the British and global media over whether Daniel Craig will be Bond in 007 film no. 25.

Naomie, who played Eve Moneypenny in Skyfall and reprised the role in Spectre, was quizzed about Craig and Bond again after she was appointed an OBE by the Queen at Buckingham Palace on Thursday (February 24th) in central London. Her comments also come just days before the Academy Awards in Hollywood, where the British actress is up for an Oscar for her critically-acclaimed role as drug addict Paula in the movie Moonlight. In her latest response to the Craig/Bond speculation, and also in light of some news that the bookmakers Coral had seen some increased betting on James Norton and Michael Fassbender as possible Bond contenders, Naomie told reporters that – if she was a betting woman – she would now put her money on Daniel to return.

Referring to the new Coral betting over Norton and Fassbender being frontrunners, she said: ‘I don’t think that’s true. I really don’t think that they’ve moved on from Daniel’. The actress explained: ‘I think there’s a very good chance that Daniel will come back. I think it’s way too early to be thinking about other people at this stage’. She continued: ‘If I was going to bet, that’s the way I would bet’.

Warming to her theme, Naomie said that she thinks Bond fans would be ‘very disappointed’ if Daniel Craig did not return to the role, and stated: ‘I think the fact that the last two Bonds – Spectre and Skyfall – have been the highest-grossing Bond movies of all time shows that people love him as Bond, and they desperately want him to return. And I don’t think Daniel is immune to that as well, I think he’s very aware of that, so I think that adds an extra level of pressure. But he has to ultimately do what feels right to him’.

Naomie collected her OBE from Queen Elizabeth for her services to drama, and she told waiting reporters that the service was ‘lovely’. The Monarch apparently asked Naomie what she was working on at the moment.

As we have noted in a previous news item, the 40-year old actress has been highly-praised by the critics for her role as Paula, her Moonlight character. It is a part which presents a radically different side to Harris when compared to her role as M’s loyal secretary Miss Moneypenny. In fact, Naomie is barely recognisable in Moonlight, and she more than demonstrates her excellent talents and very wide range as an actress, and her brave preparedness to take on highly challenging roles.

The now famous (and poignant) rooftop scene between Eve Moneypenny and James Bond at the end of Skyfall was shot on the top of the real-life Department of Energy and Climate Change building in Whitehall (near Old Scotland Yard), in central London. Interestingly, the film-makers returned back to the same area for Spectre. The quiet street just outside the same building was utilised early one Sunday morning for the final scene in Spectre, where Daniel Craig was filmed driving the Aston Martin DB5 away into the distance. 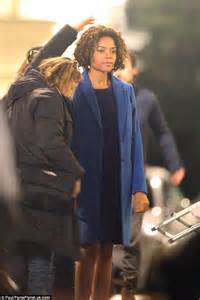