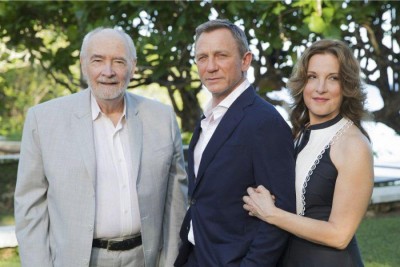 Craig’s last mission? The James Bond co-producers Barbara Broccoli and Michael G. Wilson gave a detailed interview to the showbiz writer Baz Bamigboye during the B25 launch event held at the Goldeneye villa in Jamaica.

The session drew out their latest thoughts on the role of women in the 007 franchise, the evolution of Bond’s character, and on whether B25 really is Daniel Craig’s final adventure in the iconic role.

Bamigboye’s interview, conducted on a balcony at the late Ian Fleming’s Jamaican retreat and written up for the UK’s Daily Mail (April 26th), touched on the influence of ‘Me Too’ on the film industry and saw the EON producers insist that the Bond films are always contemporary. Wilson stressed that the series ‘has been embracing Me Too for many Bond films. I don’t think any of our films would not be acceptable – certainly since Daniel started’.

He continued: ‘Over the years, attitudes have changed, and so have the Bond films. The films are representative of the times they’re in’. But Wilson also pointed out: ‘He’s a real man, who loved life and women and indulged in good food, and had to rise to the occasion when necessary. That’s the kind of character he is’.

Picking up on her brother’s point, Barbara Broccoli also explained that, with the Craig series of Bonds, 007 had evolved into ‘a very complex character, and his relationships with women are far more complex – so the women have evolved. I think this will be a wonderful fifth film, and a really extraordinary journey for Daniel’.

Intriguingly, when Bamigboye asked if B25 would definitely be Craig’s final 007 adventure, Broccoli responded: ‘That’s what he’s saying. Yes, he’s saying this is his last movie as Bond. Sadly’. But she added that ‘we’re not even remotely thinking about what will happen if indeed Daniel hangs up his holster. All we’re doing right now is making this film, and we’re so happy to have him back’.

Asked whether the next person to play 007 could be a female, Broccoli ruled it out emphatically: ‘My response to Bond being played by a woman is, well, he was written as a man’. She said that ‘what we should be doing is creating interesting stories for women, and not just turning men into women; or women into men. I’m very interested in making films about women, created for women, and not doing some sort of stunt casting by turning Bond into a woman’.

Interestingly, Broccoli also offered to Bamigboye some additional clues about the B25 storyline. She revealed that the British-born actress Lashana Lynch has been cast in the role of Paloma, who the Bond producer described as ‘very key to the story’. Broccoli also said that the Cuban-born actress Ana de Armas will play a character named Nomi ‘who helps Bond through part of the journey’, and that the women in the movie would be ‘very interesting and competitive women’.

Bamigboye also used his interview to touch on the subject of Danny Boyle’s departure from the director’s chair in 2018. Broccoli praised Boyle but said ‘we all just decided that this collaboration wasn’t working, and it was a unanimous decision. We parted very respectfully and happily. Sometimes you just have to do that’. She refused to be drawn on rumours that Boyle had wanted to kill Bond off: ‘All gossip and rumour – and we’re not going to respond to gossip and rumour’.

On the B25 storyline overall, Broccoli commented: ‘We’re throwing everything we have at Bond in this movie. He’s really going to have a rough ride’.

Principal photography on the as-yet untitled new Bond adventure commences on 28th April, 2019. Watch this space for B25 news as it develops. You know the name, and you know the number. 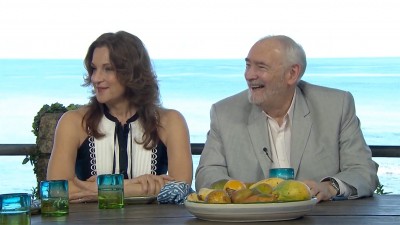 Broccoli and Wilson at Fleming’s ‘Goldeneye’ in Jamaica