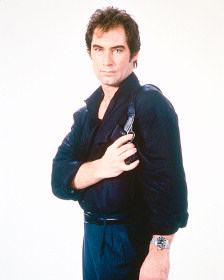 It is now an astonishing 30 years since Timothy Dalton’s second, and final, James Bond movie, Licence to Kill, hit the big screens. Often seen by its critics as a failure (it performed less well than expected in key U.S. markets, but much better internationally), Licence to Kill tends to provoke strong opinions both for and against.

Yet, the movie has much to commend it, not least another superb performance from Timothy Dalton as Fleming’s mean and moody spy, a man who felt pain, was loyal to a close friend, and who succumbed to the very human emotion of a desire for revenge in the face of injustice. As we celebrate the 30th Anniversary of the release of Tim’s second adventure as Ian Fleming’s ‘blunt instrument’, here’s (00)7 bullet-points about the movie as we look back on 1989 and the sixteenth entry in EON’s smash-hit franchise.

001: Timothy Dalton was determined to go back to the Fleming books for his interpretation of Bond and, to a certain extent, he had already successfully moved in this more realistic direction in The Living Daylights. Dalton was keen to continue this re-invention, and Licence to Kill, directed again by John Glen, pushed even further in this bold new direction. Screenwriters Richard Maibaum and Michael G. Wilson created a very down-to-earth storyline, based on the international drugs trade, ruthless drug barons and corrupt states. When Maibaum stepped back during the Writer’s Guild of America dispute in 1988, Wilson wrote the actual script by himself. Maibaum was said to have been unhappy with the final result, but it is thought this was more a case of sour grapes that the production had still gone ahead without him.

002: As many Bond fans know, the original title for the movie was Licence Revoked and this remained the case all through the main filming. However, at the last moment, the studio marketing people insisted that the title be changed, as they claimed American audiences would not know what the word ‘revoked’ meant. John Glen was very uneasy about this, but had to accept that the movie would become Licence to Kill on its release.

003: Although the film was not based on an original Ian Fleming story, there were still some great Fleming elements in the final screenplay: Anthony Zerbe played the deeply unpleasant Milton Krest, a character who had originally been in the Fleming short story The Hildebrand Rarity. Moreover, much to the delight of fans, a key scene from Fleming’s 1954 novel Live and Let Die was utilised, where 007’s American buddy was savaged by a shark and Bond discovered his mutilated body and the grim-joke message ‘He disagreed with something that ate him’. Even better, actor David Hedison was invited to play Leiter again, a role he had first played in Roger Moore’s debut movie Live and Let Die.

004: As on his previous outing as 007, Tim Dalton was determined to do as many of his own stunts as possible and be at the very heart of the action. He relished giving his James Bond a gritty and authentic visual dimension, and very much believed that doing much of this himself helped create a better and more believable experience for cinema audiences. However, sometimes fight scenes could be unpredictable, despite all the precautions and careful risk assessments. At one point, in a fight scene between Dalton and actor Benicio Del Toro (who was playing Sanchez’s henchman Dario), Benicio accidentally cut Tim’s hand quite badly with a knife, and the Bond star had to be hauled off to hospital to have his hand stitched.

005: Although some critics complained that the movie’s main villain, Franz Sanchez, was not a ‘proper’ Fleming baddie, this was arguably unfair; Robert Davi’s performance as the ruthless drugs baron was charismatic and suitably menacing, with quite a complex number of contradictory facets to his character. In fact, in the same way that Dalton wanted to invest his Bond with a new authenticity, Davi was determined to portray a very believable villain. It was a courageous step. In hindsight, the problem for both Dalton and Davi is that audiences were still quite wedded to the more light-hearted storylines and exotic locations of the Roger Moore years, and appeared to find the change of tone too dark.

006: Speaking in an interview given in 2014, as he was about to appear in the gothic horror TV series Penny Dreadful, Tim Dalton gave some frank assessment of his time as Bond. Looking back, he said that the prevailing wisdom at the time he became James Bond was that the series, ‘whilst very entertaining, had become rather spoof-like’. He said producer Cubby Broccoli ‘wanted to try and bring it back to something more like its original roots with [the] Sean Connery films’, but when Cubby and Tim actually did this, they found that nobody else really wanted to change it, as ‘everybody was happy with what they know’.

007: Speaking in the same interview, Dalton explained further that, despite people conceding at the time that the series had become a bit stale, nobody actually wanted to change it in practice: ‘So it wasn’t as easy as one would hope. I mean, now they have. But that was, what, almost 20 years later that they actually embarked on something more believable’.

In many ways, Daniel Craig’s version of Bond is probably the version Dalton sought to achieve back in 1989, but perhaps audiences were simply not ready for this new direction back then. Just after it was released, Dalton said he was ‘hugely impressed’ with Craig’s Skyfall (2012). He also told the Sunday Express in December, 2012: ‘On almost every level this Bond movie is right at the forefront of what cinema is capable of. It is an absolutely modern James Bond, a movie truly of its time. Daniel Craig is fantastic and it feels very real’. 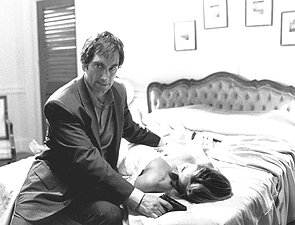