COCA-COLA ZERO UNLOCKS THE 007 IN YOU 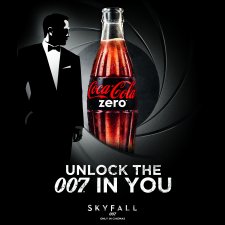 The Coca-Cola Company today announced an exciting new partnership between its Coca-Cola Zero brand and SKYFALL™, the highly anticipated 23rd installment of the James Bond series due for worldwide release this fall. To showcase the association, the eye-catching, stylish black design of Coke Zero products will receive a special makeover.

The limited edition Bond designs will feature across multiple pack formats, including the iconic ‘Coke Zero’ can, PET bottle and a sophisticated looking aluminium bottle which all showcase the famous Bond ‘gun barrel’ design.

The announcement continues the successful partnership, which began in 2008 through the brand’s association with Quantum of Solace. This time, Coca-Cola Zero, the refreshing combination of great taste and zero sugar, will be asking fans to “Unlock The 007 In You”.

Daniel Craig is back as Ian Fleming’s James Bond 007 in SKYFALL™, the 23rd adventure in the longest-running film franchise of all time.  In SKYFALL™, Bond’s loyalty to M is tested as her past comes back to haunt her.  As MI6 comes under attack, 007 must track down and destroy the threat, no matter how personal the cost.  The film is from Albert R. Broccoli’s EON Productions, Metro-Goldwyn-Mayer Studios, and Sony Pictures Entertainment.  Directed by Sam Mendes.  Produced by Michael G. Wilson and Barbara Broccoli.  Written by Neal Purvis & Robert Wade and John Logan.

Zoe Howorth, Marketing Director for Coca-Cola Great Britain said: “SKYFALL™ is without a doubt one of this year’s most anticipated film releases, and we are very excited to be a part of it and to continue our relationship with the world’s favourite movie franchise.  James Bond is a global cultural icon who consistently takes action to create what’s possible, making this the perfect partnership for Coca-Cola Zero.”

Coca-Cola Zero will roll out a fully integrated marketing campaign to support the partnership including television, cinema, PR and iconic outdoor advertising, a digital and social media campaign as well as on-pack, retail and cinema activation.  A high-impact TV/Cinema spot has also been created to support the partnership. The new commercial will demonstrate how Coca-Cola Zero drives you to unlock the 007 in you.

Further information on the campaign will be announced in Autumn 2012.