Broccoli and Wilson Speak to ‘SFX’ 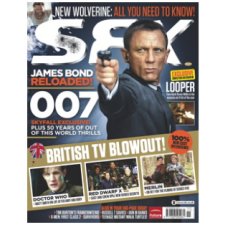 The new issue of the British sci-fi magazine SFX includes some intriguing comments by Bond producers Barbara Broccoli and Michael G. Wilson on both ‘Skyfall’ and possible future Bond plots.

The sci-fi magazine, which has just appeared on news-stands in the UK, has Daniel Craig on the front cover and helps celebrate the 50th anniversary of the 007 franchise with some coverage of the making of ‘Skyfall’, as well as a special article by former 1970s Bond screenwriter Christopher Wood, and an interview with title sequences creator Danny Kleinman.

In addition, there is also an entertaining map devoted to 007’s globe-hopping over the years, illustrated in cartoon form by Paul Cemmick, and a small piece on some rare Bond posters.

In the SFX article on ‘Skyfall’, the Bond producers explain how important it was to make a Bond film for 2012. Bond co-producer Michael Wilson reflected that: ‘We were hoping we could make one in the 50th anniversary year. That was our goal, and we just made it. We certainly want to make a good film, and it’s a chance to celebrate a whole franchise as well. It’s like a cross-section of the Bond films’.

Barbara Broccoli, in her comments to the magazine, added: ‘It was important to us, for the Bond fans, that we made a film this year, so that they can celebrate 50 years. It feels very much like a classic Bond film, and we’ve tried to incorporate as many elements as we possibly can’.

On Daniel Craig’s evolution as James Bond, Broccoli also told SFX: ‘Casino Royale was about him becoming Bond, and then in Quantum he was settling the score with the Quantum organisation. I think now it’s fair to say that Daniel’s fully at the helm of the character, and has to meet the challenges Bond is put through, storywise and emotionally, in the telling of this story’.

Interestingly, Wilson and Broccoli told SFX that they have not abandoned the Quantum organisation, but also confirmed that it is not used in ‘Skyfall’. Wilson also revealed that they have the rights to bring back Blofeld and SPECTRE. ‘We believe we can use them. They’re a little dated at the moment. We went for the Quantum organisation, which was more business oriented, trying to corner the market on scarce resources, rather than a criminal organisation that did blackmail and bank robberies…’.

But Wilson’s co-producer Barbara Broccoli added, cautiously, that they needed a little more time to pass before they could go back to ‘extortion and blackmail! The Quantum organisation does seem far more realistic’.

In the interview with Danny Kleinman, the man charged with the job of creating the latest 007 title sequences said: ‘I think it’s time to slightly reinvent it again. Make it maybe a bit more vital and a bit more psychological – not change everything, but just enough that it feels different and fresh’.