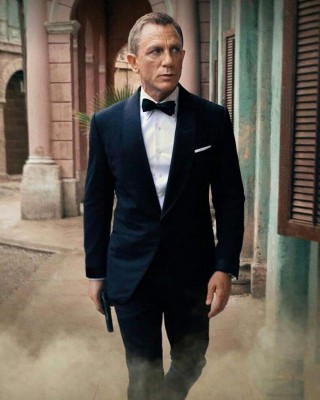 Where next for 007? Naturally, as this appears to be Daniel Craig’s farewell, there is bound to be curiosity about any new direction for the EON franchise. The ‘culture’ section of the UK’s Sunday Times (March 8th) devoted four pages to the James Bond series and 007’s future after the release of No Time To Die later this year.

The article, penned by Jonathan Dean, discussed how the world of the cinema version of Bond has changed during its nearly-60 year existence, and whether Bond will remain ‘relevant’ in the future (which seems to be a favourite topic of some media pundits).

To talk all this over, Dean was able to meet Daniel Craig, Barbara Broccoli, Lashana Lynch and Rami Malek in New York. Director Cary Fukunaga, who was busy finishing the new film, was also interviewed a short while later.

Referring to his fifth and final time in the role of 007, Daniel said: ‘I won’t lie – it was very sad to finish’. Quizzed further about his assertion last year that they aimed to make the best Bond movie they could make, Craig explained: ‘There just aren’t films being made like this. Marvel, no disrespect, have a lot of effects’. But, in Craig’s view, there is something ‘very special’ about the 007 films.

Asked whether he will have a say in his successor as 007, Craig said: ‘No. But I’ll be excited when it happens, as I’m a Bond fan. Was before, still am’.

EON producer Barbara Broccoli was also asked whether the Bond movies could stay ‘relevant’. She responded: ‘People always ask if Bond is relevant. I remember when the Berlin Wall came down. Just before we made Goldeneye. Everyone said, “The world’s at peace, why do we need Bond?” Well, the world wasn’t at peace, and as long as the world needs a hero, Bond is going to be relevant’.

Fukunaga, in his comments to the newspaper’s article writer, said: ‘You always want to go out strong. So Daniel wants to end his run as memorably as possible. For me, though, as this is my first Bond, I also want to do the best possible. I don’t want to be the one making the worst Bond, the one who let down Daniel on his final outing’.

On the question of who can replace Craig in the role, and the future direction of the series, there was evident caution from those interviewed. Broccoli, as in previous interviews, said Bond would remain male: ‘I’m not interested in taking a male character and having a woman play it’. Lashana Lynch, who plays a double-o agent named Nomi in the new film, said she welcomed the many conversations that were taking place about what type of person can play the spy, while Rami Malek, who plays bad guy Safin, was more cautious, and suggested some time should be taken after No Time To Die to mull things over: ‘Let’s see where the world is’, he added, and how a franchise ‘that reaches millions of people’ can send a positive and hopeful message.

Interestingly, the Sunday Times profile confirmed that the running time for the new Bond movie will be 163 minutes. As EON revealed last week, the new release date for No Time To Die will now be later this year, in November 2020. As ever, the JBIFC will bring you updates and news as it develops. You know the name, and you know the number. 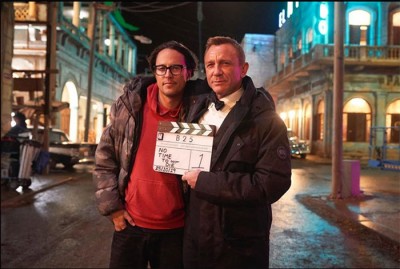 Fukunaga and Craig on the last evening of filming on NTTD.