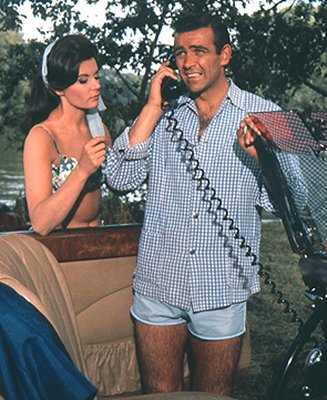 The JBIFC is very sad to report that actress Eunice Gayson, the first woman to appear opposite Sean Connery’s James Bond in the first big-screen 007 movie Dr. No (1962), has passed away in Surrey, where she was born and also resided for much of her life.

Playing the role of Sylvia Trench, Gayson appeared opposite Sean Connery’s 007 in the now famous Casino scene in Dr. No where Connery’s James Bond (‘Bond. James Bond’) was introduced to the world for the first time, a truly iconic moment.

Director Terence Young saw the role of Sylvia as a character who would become Bond’s regular girlfriend and, indeed, Eunice returned briefly as Sylvia in the second 007 movie From Russia With Love (1963). However, and much to Gayson’s regret, Sylvia did not appear in the third Bond movie Goldfinger (1964), directed by Guy Hamilton.

Although her precise age was difficult to gauge (some reports suggest that she was born in 1928, while others believe she was born on 17th March, 1931), Eunice showed clear singing and dancing skills from an early age and, at first, trained for the opera. She then became interested in theatre, TV and film, and her first big-screen appearance was in My Brother Jonathan (1948). This was followed shortly after by Melody in the Dark (1948), and other screen credits in the 1950s included Street Corner (1953) (with Pedro Armendariz) and Out of the Clouds (1954) (with Bernard Lee). Another early movie role came in Down Among the ‘Z’ Men (1952), a cinema vehicle for the highly popular radio comedy trio ‘The Goons’ (Spike Milligan, Harry Secombe and Peter Sellers). She also worked briefly with the trio on a second project, a made-for-TV ‘news’ parody. Later in the 1950s Eunice became something of a ‘Hammer Horror’ woman when she was given the lead female role in The Revenge of Frankenstein (1958), where she starred alongside Peter Cushing.

At first considered for the role of ‘M’s secretary Miss Moneypenny, Terence Young decided that Eunice would be more suitable as 007’s regular love interest and, as Gayson herself once commented: ‘Terence planned that Bond should marry her in the last film’ (in the early 1960s, Young and EON had expected the series to last for only three or four movies at the most). Interestingly, Gayson’s character, Sylvia Trench, was named ‘Sylvia Trenchard’ in an early draft of the script for Dr. No. 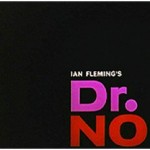 In later years, in interviews to publicise her memoirs, The First Lady of Bond (2012), Eunice recalled the now famous Casino scene, where Trench sat opposite the still mysterious 007 at the chemin de fer table in Le Cercle club in London (actually shot at Pinewood studios).

According to Eunice, after a number of delays, Sean was quite nervous about this scene on the day, and fluffed his famous ‘Bond. James Bond’ line a few times. The director apparently asked Eunice and Sean to take a day’s break and have a drink or two. It worked! Sean returned to the set visibly relaxed and was then able to deliver his famous line perfectly. Ironically, Eunice found that in the final cut to the new movie, her lines had been dubbed by dubbing artist Nikki van der Zyl, who became a regular voice artist in the early Bond movies. However, Gayson’s real voice can still be heard in one of the cinema trailers to Dr. No.

In the movie, after Bond is briefed on his new mission by ‘M’ (Bernard Lee) at MI6 HQ, he returns back to his Chelsea apartment and, thinking he has an intruder, he instead discovers Trench waiting patiently for him, practicing golf in nothing but a shirt and high-heel shoes. This scene was considered quite daring at the time, and some commentators wondered whether it was Bond who was seduced Trench or Trench who really seduced 007. Which ever way one looks at it, the memorable scene helped set the tone for a new and powerfully sexy type of woman on the big-screen, and seemed to anticipate the new sexual liberation of the 1960s.

After returning as Trench in an early riverside scene in From Russia With Love (where Bond’s Bentley car also is seen briefly), there was every indication that the flirtatious Sylvia would also return in Bond movie no. 3. However, sadly, this was not to be. In the meantime, Eunice made guest appearances in a number of popular British TV series, including in two episodes of The Saint with Roger Moore. Sharp-eyed viewers can spot her, for example, in episodes of Dangerman, The Adventurer and The Avengers.

Eunice, who married twice,  continued to take acting parts on and off for a number of years afterwards and, in the early 1990s, had a key role in a stage musical. In later life, she was also quite active in arts circles in Walton-on-Thames in Surrey, where she lived. At one point, happy at being ‘rediscovered’ as a local celebrity, she also took a brief role in an amateur dramatics play in Kingston-on-Thames, where did a gentle lampoon of a female spy.

Eunice also made a Bond ‘comeback’ in the mid-1990s, when she realised how highly regarded she was as part of the unique circle of ‘Bond women’ that there have been in the EON series over the years. She began to attend a number of Bond-related events, and clearly enjoyed meeting fans of her on-screen work. With her second husband, Brian Jackson, Gayson had had a daughter, Kate, who also became an actress and entered (in a sense) the special ‘Bond women’ club, with a brief role in Pierce Brosnan’s debut 007 movie Goldeneye (1995).

Speaking about this to a showbiz and celebrity magazine in 1995, Gayson said she was proud that her daughter, who gained a degree in Theatre and Drama, had followed in her mother’s footsteps. But Eunice emphasised that it was Kate’s talent, not her mother’s influence, that got her the small part in Goldeneye. Eunice said: ‘It was a real shock when Kate phoned to tell me the good news. I’m sure many people will say that I pulled a few strings, but I didn’t’.

And it was almost as if history was repeating itself: pleasingly, Kate was in a Casino scene where Pierce Brosnan encountered Russian femme fatale Xenia Onatopp (Famke Janssen). Speaking alongside her mother, Kate recalled: ‘What made it so special was that a lot of the crew actually remembered my mother from her appearances’.

Looking back on her own role as James Bond’s first ‘Bond woman’, Eunice pointed out in the same interview: ‘What made Bond girls really become popular was that they veered away from the blonde stereotype of British women in films. And it was the first time they showed off their sexuality – which blew men’s minds all over the world’.

In the Noughties, Eunice also enjoyed going along to various reunions of the surviving Bond women, including one held to publicise a Bond-related exhibition at the UK’s National Motor Museum in early 2012. She was happy to chat to both fans and the other Bond women, such as Britt Ekland, Jenny Hanley and Madeleine Smith, about her special part in Bond screen history. To help celebrate the 50th Anniversary of Dr. No, Eunice also held an ‘Evening with Eunice Gayson’ at the Cinema Museum in London in October, 2012, and also enjoyed all the Skyfall publicity events she was involved with in the same year. Her last on-screen appearance was in the popular British TV series Masterchef in 2013.

Eunice died on Friday, 8th June, and her family released the sad news the next day, commenting on twitter that Eunice was: ‘An amazing lady who left a lasting impression on everyone she met. She will be very much missed’. EON Bond producers Michael G. Wilson and Barbara Broccoli also issued a statement, where they paid fulsome tribute to Eunice. They said they were ‘so sad’ to learn that their very first Bond girl had passed away and added: ‘Our sincere thoughts are with her family’. 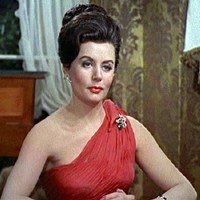 Eunice as Sylvia Trench in the famous Casino scene in ‘Dr. No’