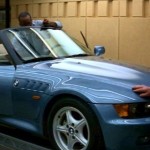 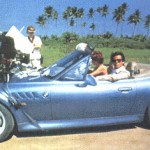 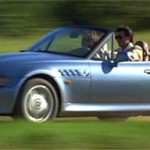 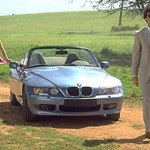 The first BMW in a James Bond film took place in a chase scene in 1983’s Octopussy.
On the Berlin Avus, the Police, who had 5 Series BMWs cars and a BMW motorcycle, are in pursuit of James Bond, who is driving a stolen Alfa Romeo on a breakneck ride through the streets of Berlin.

In summer 1994 GoldenEye was in preparation, and cars were an important element for its success. After the producers visited BMW’s design center in Munich, the decision was made to use the Z3 roadster as James Bond’s official car. It was the first German car that Bond drove as his official car. Important factors in the decision were certainly also the fact that, in the meantime, BMW had also become English – by purchasing the Rover Group – and that the car was produced in the U.S. plant in Spartanburg, which gave the car an international character. The common marketing goals were also important to both parties in maximising the appeal of the car and the film to all their customers. The agreement called for BMW to refer to the film in a world-wide campaign for the car from November 1995 through March 1996.

The agreement called for BMW to refer to the film in a special way in a worldwide campaign for the car from November 1995 through March 1996. This meant that BMW did not purchase a license, but rather became a marketing partner. No money changed hands between the contracting parties, since both had common interests, which were accomplished through what is referred to as cross promotion. The chief of BMW at that time, Bernd Pischetsrieder, confirmed this at the General Meeting of Shareholders, and Richard Gaul, Chief of Public Relations at BMW, supplemented as follows: We made two prototypes available for the filming. These cars are now back in our possession and can be used for exhibits. No money was paid; we never do that.

On January 22, 1995, the cooperation of BMW was officially announced at a press conference held for the start of the filming for GoldenEye in the English studios in Leavesden – which, by the way, used to be Rolls Royce buildings. Forty television stations from all over the world and approximately 500 journalists were present. A large, brown shipping container with a white & blue BMW emblem, which stood between an Aston Martin DB 5 with silver metallic paint and a yellow Ferrari 355 GTS, revealed the fact that the Z3 roadster from BMW would see action, but did not reveal the car’s appearance, which at that time was still top secret.

The car was kept in utter secrecy. Not a photograph became published, not even from the filming sessions that were done in public.

For the filming, BMW provided two handmade pre-production models. Additionally, there were transportation costs and accompany guards, so that no photographs would get into the hands of the press prior to the official premiere of the films and the car. The filming was done in Pinewood Studios in London and in Puerto Rico, which doubled for Cuba.

On November 13, 1995, the day of the international premiere of GoldenEye in Radio City Music Hall in New York, the Z3 roadster was presented to the press in Central Park by Q actor Desmond Llewelyn and by the star, Pierce Brosnan. That evening, twenty Z3s were available near the theater for curious eyes to examine. The car became a big success right away. There were also prominent people from the film industry among the customers, such as Alec Baldwin, who bought one for his wife, Kim Basinger; Madonna, who even bought two for good friends; and Steven Spielberg – he gave one of these white & blue cars to his 75-year old mother.