Blofeld and Beyond: The ‘big reveal’ in the fifth Bond movie 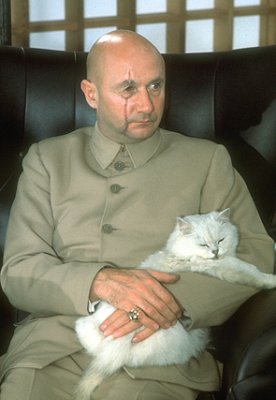 The fifth smash-hit EON James Bond movie, You Only Live Twice (1967), celebrates its fiftieth birthday this year, and – as a contribution to this – the JBIFC takes the opportunity to briefly explore the role of the main baddie in the film, and how Blofeld was introduced in full to cinemagoers for the first time, after remaining a rather shadowy presence in two previous entries in the series.

It is no exaggeration to say that Sean Connery’s Japan-based adventure contained some of the most memorable 007 movie moments of the 1960s, including one of the biggest sets yet seen in the James Bond franchise, created by the hugely imaginative Ken Adam.

Moreover, audiences were finally given their first sight of the mysterious villain who was intent on causing World War Three, bringing to a climax the anticipation over his identity, built up so teasingly both in the film and in two previous movies: ‘Allow me to introduce myself. I am Ernst Stavro Blofeld’.

When Ian Fleming first introduced the criminal network SPECTRE in the novel Thunderball in 1961, he created an organisation which has become, in the view of a number of commentators, one of the most famous fictional crime syndicates in popular literature. Along with its evil boss Blofeld, it also became, of course, a major part of the James Bond legend on the big screen, with You Only Live Twice setting the template for a whole wave of movies with global-scale nefarious schemes dreamt up by super-villains at their heart.

In fact, the influence of You Only Live Twice on the subsequent 007 films also remained very strong, with the EON franchise even ‘re-imagining’ the Blofeld super-villain concept for the most recent and 24th James Bond movie SPECTRE, directed by Sam Mendes and released in 2015.

Ernst Stavro Blofeld was first introduced to the world in Ian Fleming’s 007 novel Thunderball in 1961, where he was head of SP.E.C.T.R.E. (SPecial Executive for Counter-intelligence, Terrorism, Revenge and Extortion), a global criminal network with its secret headquarters in Paris. It operated under the guise of the ‘International Brotherhood of Resistance Against Oppression’, a kind of cross between a charity and a human rights organisation. Behind the public veneer, the SPECTRE network was utterly ruthless and was primarily concerned with generating profit for Blofeld and its executive board, no matter how this was done.

As originally described by Fleming, Blofeld was a physically large man, very tall and weighing over twenty stone. Born in Imperial Germany in 1908, his father was Polish and his mother Greek (‘Stavro’ is a Greek name). His eyes were dark, rather like Benito Mussolini’s, and his face was topped with black crew-cut hair; he did not smoke or drink, and he regularly chewed violet-scented mints. By On Her Majesty’s Secret Service (1963), however, Blofeld had changed locations to Switzerland and radically altered his appearance: he had lost weight, now had long, silver-coloured hair, no ear-lobes, and wore dark green-tinted contact lenses. He also desperately sought recognition of the aristocratic title of the Count de Bleuville. In You Only Live Twice (1964), Blofeld had again altered his appearance and was now living in Japan, operating under the alias of Dr. Guntram Shatterhand. In many ways, SPECTRE had now become a much smaller organisation, very much under the direct personal control of Blofeld and his evil assistant Irma Bunt.

From Page to Screen

In the EON Sean Connery Bond movies of the 1960s, SPECTRE was first name-checked in Dr. No (1962), and Blofeld himself was first glimpsed (in profile only) in From Russia With Love (1963), where cinema audiences were also introduced to the now famous ‘Octopus’ symbol, used in secret communications or on rings worn by the organisation’s members. Blofeld was also seen in profile again in Thunderball (1965). When it came to transferring Fleming’s novel of You Only Live Twice to the big screen, however – apart from Blofeld, Tiger Tanaka, and the Japanese location – very few elements of the original novel were retained. Author Roald Dahl (1916-1990), the man chosen by the Bond producers to pen the storyline for EON’s fifth Bond movie, dropped much of Fleming’s original story (which centred on a remote Japanese castle with Blofeld running a special ‘Garden of Death’).

More radically, even though he had only seen one Bond movie himself (Goldfinger), Dahl decided to tap into and build upon some of the more ‘sci-fi’ concepts seen in the series (the producers had quickly ensured that Dahl saw the other three Bond films). He thus delivered a screenplay with a space-age backdrop for Blofeld’s grand scheme, which cannily played upon fears of nuclear war and the growing interest in the 1960s in new forms of advanced technology. In hindsight, it was an inspired move: nearly the whole world had seen images of the first space launches on their TV sets, and it gave the fifth Bond movie a very contemporary feel. Indeed, once he had settled upon his basic storyline, Dahl really got stuck in and turned in the first draft in only six weeks (with some additional material by writer Hal Bloom). Dahl later said in interviews that he had been especially influenced by the American Gemini space project and its space-walks. The ‘Cold War’ angle was also milked to the full with Blofeld’s evil scheme focusing on him trying to cause the outbreak of nuclear armed conflict between the two superpowers of America and Russia.

One of the big highlights of You Only Live Twice was arguably the final ‘reveal’ of Blofeld in the form of actor Donald Pleasence (1905-1995) , who was best-known to international audiences for his role in the prisoner-of-war film The Great Escape (1963), but had also specialised in playing rather sinister figures, such as in the British horror comedy What a Carve Up! (1961). As many Bond fans now know, the Czech actor Jan Werich was initially cast as Blofeld, but after some brief filming with him was carried out the director, Lewis Gilbert, thought the bearded Werich looked too benign and more like Father Christmas than a dangerous Bond villain (he could also barely speak English). Gilbert raised his concerns with Cubby Broccoli, who agreed with the director’s misgivings. A disappointed Werich was thus replaced with Pleasence. But what is not often realised is that Werich worked on the movie for about five days, and some of Sean Connery’s ‘reaction’ shots to the big Blofeld ‘reveal’ were actually in response to seeing Werich.

A key decision was then taken to reinforce the shock value of seeing Blofeld for the first time: Pleasence was provided by the makeup artists with a disfiguring scar on his face, with some grafted skin stretched partly over one of his eyes. This final eerie facial look, however, was only settled upon after some experimentation with a hump, a limp, and even a lame hand! But, partly due to some well-written dialogue between Connery and Pleasence, the Bond versus Blofeld confrontation and repartee worked very well, and the bald-headed arch-villain became one of the most memorable features of the early Bond series. In fact, he has become something of a cultural icon.

Significantly, perhaps in a nod to his own nostalgic fondness for the Donald Pleasence interpretation of Blofeld in You Only Live Twice, director Sam Mendes was keen for the Christoph Waltz version of the arch-villain in SPECTRE (2015) to have a damaged eye. Indeed, as the February, 2016, issue of the film magazine Cinefex noted, the final visual ‘look’ of Blofeld in the climax to the SPECTRE storyline was especially important for the director: Mendes wanted Blofeld’s appearance to reference the version seen in the film You Only Live Twice, and a number of versions of Blofeld’s damaged eye were apparently tried out by the makeup department before the final one was settled on. It was almost as if history was repeating itself!

Ian Fleming had a bit of a habit of ‘borrowing’ names for his characters from friends or from other people he encountered in real life. Blofeld is a good example. Some of Fleming’s biographers have argued that the James Bond author ‘borrowed’ the name ‘Blofeld’ from Tom Blofeld, a Norfolk farmer who was chairman of the Country Gentleman’s Association and also a fellow club member of Boodle’s, the London club where Fleming often went to eat regularly. He had also been a contemporary of Fleming’s at Eton school. Incidentally, Tom Blofeld’s son is the famous British cricket commentator Henry Blofeld.