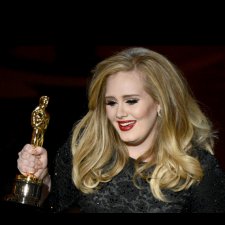 The British singer Adele, who won an Oscar in 2013 for her theme song to Skyfall,  was the headline act at the famous Glastonbury music festival in Somerset over the weekend. Her live performance, which took place at 10.15pm on the evening of Saturday, 25 June, was given to a huge crowd of enthusiastic festival-goers and music fans who had gathered in front of the giant Pyramid Stage at the Festival.

The highly popular singer, who remains one of the most successful female music artists in the world, famously suffers from stage fright, but clearly overcame this for the special evening. In fact, at one point she commented: ‘I didn’t want to come on and now I don’t want to go off’. Her 90-minute, 15-song set proved to be one of the true highlights of the Festival, and included (much to the pleasure of Bond fans) a rousing rendition of Skyfall, which saw many members of the audience singing along to the words.  Just before Adele began her performance of the now classic Bond song, she explained why there is no video to accompany it: ‘I didn’t do a video because I was nine and a half months pregnant and about to drop any day. Who wants to do a Bond video if you don’t look like Halle Berry?’ She also recalled all the ‘secrecy’ that had surrounded her being both chosen for the song and being able to read the script for the first time.

The iconic award-winning song, which earned Adele an Oscar along with her co-writer Paul Epworth, triumphed at the Academy Awards ceremony in Los Angeles back in February 2013.

Sky High: Adele at the Oscars

Although it is now three years since the triumph of the song at the Oscars, both the song and the event remain as fresh and memorable as ever. The award for Skyfall, for Best Original Song, was announced at the Academy Awards live on stage by the actor Richard Gere. Adele, who accepted the Oscar on stage along with her co-writer Paul, was clearly overcome with emotion and joy. In a short acceptance speech, the 24-year old singer, who comes from London, thanked the Bond producers Barbara Broccoli and Michael Wilson at EON Productions, along with Sony Pictures, MGM, and ‘Paul Epworth for believing in me all the time’. Adele’s co-writer, Paul Epworth, standing next to her, also spoke from the stage, commenting: ‘I can’t really believe I’m up here to receive this!’ As Adele left the stage, she also shouted to the audience ‘You’re all amazing as well!’

The theme song to Daniel Craig’s third James Bond movie had already won major awards, such as a Golden Globe and a Brit Award, and, at that stage (2013), it had sold more than 2 million copies globally. At one point, it reached no.2 in the UK’s singles charts.

Bond fans may also recall that the 85th Academy Awards evening in 2013 also saw a special celebration of the James Bond movie franchise. Former Bond woman Halle Berry (who played Jinx in Die Another Day) introduced the 007 films tribute, which then went into a special reel of clips from the previous 50 years of the movies, sequences which had been chosen (apparently) by the Oscars event organisers themselves.

Dame Shirley Bassey, wearing a golden dress, then continued the proceedings in great style when she belted out her iconic theme song for Goldfinger (1964), which many people regard as one of the most famous and memorable of all the 007 theme songs. Dame Shirley earned a standing ovation for her performance of the song, the first standing ovation of the evening. There was also a special performance of Skyfall by Adele, the first time she had delivered her award-winning song live on stage. This also received a rousing reception from the audience. And, as we discovered shortly afterwards, the song was then officially recognised by the Academy.

It is more than clear today (2016) that Adele’s song is now regarded as something of a ‘classic’ Bond song, and there are numerous cover-versions available on the world wide web. Daniel Craig’s fourth Bond movie, Spectre, of course, maintained the sky high award-winning standard set for the music of the Bond franchise, when Sam Smith’s theme song for the movie stormed to no. 1 in the UK’s singles charts, and also picked up some top awards, including an Oscar for Best Song.

It all goes to show (to coin a phrase) that Bond songs truly are forever. 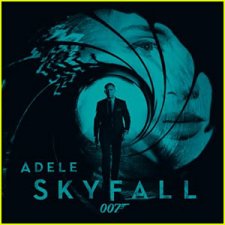