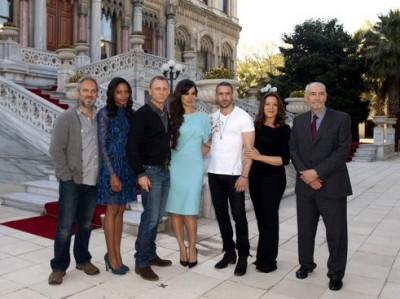 Daniel Craig appeared at a special press conference and photocall held by the ‘Skyfall’ production team at a hotel in Istanbul on Sunday April 29.

The conference, attended by members of the Turkish and international press, was held at the prestigious Ciragan Palace Hotel, a five-star hotel in Istanbul, which used to be the Sultan’s Summer Palace and retreat during the days of the old Ottoman Empire. In beautiful baroque-style surroundings, the conference saw Craig line up on stage to answer various questions from the media, alongside Ola Rapace (who plays a cold-blooded mercenary in the Turkish sequences), Berenice Marlohe (who plays Severine), Naomie Harris (who plays Eve), director Sam Mendes, and EON producers Barbara Broccoli and Michael G. Wilson.

Second Unit filming has already taken place in Turkey over the last few weeks, in both the southern province of Adana and in the famous Grand Bazaar in Istanbul. Since the main Unit arrived in Turkey on April 22, filming has been conducted in the seaside town and port of Fethiye, and also near the port on a 56-meter long luxury yacht called the ‘Regina’ (featuring scenes involving Craig and Berenice Marlohe).

At the Ciragan Palace press conference, Craig explained some of the background to pre-production on ‘Skyfall’ and some of the further research he himself had done on Ian Fleming’s novels, throwing out ideas to Sam Mendes in the process. Craig said at one point: ‘During MGM’s financial issues I re-read the books and kept e-mailing Sam saying, “What about this? What about this?”‘. Questioned about his interpretation of Bond in the new movie, Craig said 007’s love-life in the movie will be ‘rich’.

Sam Mendes also commented on how he will interpret the character. Mendes said he is going back to Ian Fleming’s original character in the books, a man who was complex and depressed about the whole job of killing others. He also revealed: ‘I am making a film that’s both a traditional Bond film, but also one that’s very personal to me’.

The two Bond producers, Barbara Broccoli and Michael Wilson, also confirmed to the press that there were plans for another Bond movie after ‘Skyfall’.