007 Facts About ‘Tomorrow’: Looking Back on the 18th Bond Film 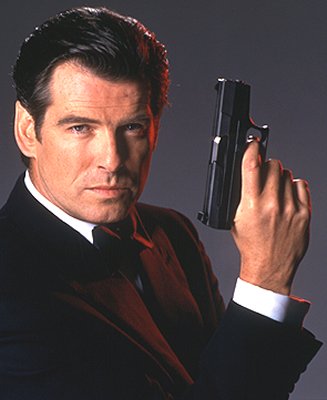 Later this year the 18th James Bond movie, Tomorrow Never Dies, which starred Pierce Brosnan in his second 007 adventure, will celebrate its 20th birthday (it received its World Premiere at the famous Odeon Leicester Square, in central London, on 9th December, 1997).

Directed by Roger Spottiswoode and with a screenplay by Bruce Feirstein, Brosnan’s second stab at the role of James Bond saw him up against the manipulative media mogul Elliot Carver, played by Jonathan Pryce.

As part of the upcoming celebrations, the JBIFC takes the opportunity to briefly look back on the film and present (00)7 interesting facts and memories about Tomorrow, some familiar, others less well-known.

007: How did the critics react to the new Bond movie upon its release? The influential American film industry journal Variety decided that Tomorrow had plenty of ‘bang-bang but very little kiss-kiss’, heavily favouring ‘straight-ahead action above all else’; the journal predicted the movie would ‘perform handsomely’, and noted: ‘For his part, Pierce Brosnan now looks so at ease in the role that its seems like second nature to him…’. On the other hand, Variety argued that ‘elsewhere the excitement and satisfaction is rather more intermittent, with too much running time devoted to good guys and bad guys spraying machine gun fire at one another’. In the UK, the respected Sight and Sound movie magazine decided that the new 007 film had ‘cannibalised’ too much from previous entries in the series: ‘Tomorrow is like a photocopy of a collage of previous Bonds…’, and was ‘far from premium Bond’. But the British cinema-going public clearly had no time for this rather harsh verdict: TND quickly stormed the box-office charts. The movie opened in the UK, for example, with the highest three-day grosses ever for a James Bond film up to that point, even eclipsing Goldeneye‘s 1995 November release. 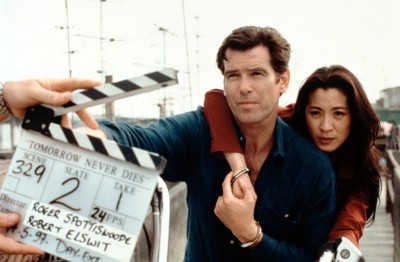 Pierce Brosnan and Michelle Yeoh prepare for a TND take